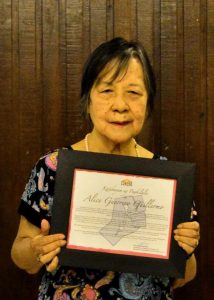 (JUL. 30)—Dr. Alice G. Guillermo, professor emerita and former chair of the UP College of Arts and Letters Department of Arts Studies (DAS), passed away on Jul. 29 after a long illness. She was 80.

In May this year, the DAS, together with the College of Fine Arts and Alliance of Concerned Teachers, organized a fundraising event for Guillermo who suffered an acute intraparenchymal hemorrhage or hemorrhagic stroke and an acute kidney injury.

She was awarded by the French government a scholarship at the Université d’Aix-Marseille in France.

She was a UP Diliman faculty member and taught art history, art theory and humanities from the 1970s to 2003. She was appointed professor emerita by the UP Board of Regents at its 1179th meeting on Feb. 26, 2004 according to the UP Gazette Volume XXXV, Number 1 (January to March 2004) issue.

Meanwhile, the DAS in a message posted on their Facebook page announced her passing. They consider her “a pioneering force in Philippine Art. Along with other esteemed faculty members, she helped set new directions in the field of art scholarship. Among her legacies are her multiple books and essays on art history, art criticism and cultural studies that serve as foundation for Art Studies in the Philippines.”

She is survived by her husband, poet and essayist Gelacio Guillermo, and children, Ramon and Sofia.

Guillermo’s family announced in the Art for Alice’s Facebook Page that “There will be no wake for Alice Guillermo. Her ashes will be brought home. Her family thanks everyone for the many tributes and the great outpouring of support.”