By Benito V. Sanvictores Jr., images by Leonardo A. Reyes

(AUG. 28) –In honor of the man who played a significant role in his life, UP Regent and engineer Magdaleno B. Albarracin Jr. donated P20 million to the Cesar E.A. Virata School of Business (VSB), formerly the College of Business Administration (CBA).

“I am doing this donation to pay tribute to former Prime Minister Cesar E.A. Virata, a man who believed in me and other co-faculty members when he sent us to the USA for further studies,” Albarracin said during a short program held at the Executive House on Aug. 13.

Albarracin said faculty members were sent to the Unites States to pursue their doctoral and post-doctoral degrees from 1960 to 1967 during the term of Virata as CBA dean. 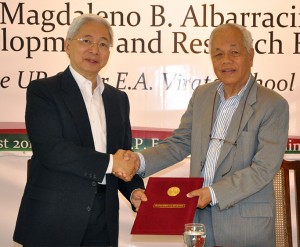 The donation was intended for the establishment of the VSB Magdaleno B. Albarracin Jr. Faculty Development and Research Endowment Trust Fund.

Albarracin said the trust fund can be used by the college to help its faculty pursue doctoral (PhD) and post-doctoral degrees.  “This will also prevent the vacuum that will be left behind by senior faculty members with PhDs when they retire.  The younger faculty members will be encouraged to pursue their studies thus replenishing the retiring PhD holders,” he continued.

The trust fund can also be used to support research programs and projects related to the academic agenda of UP as the national university.

UP President Alfredo E. Pascual accepted the donation on behalf of the University and acknowledged Albarracin as a “loyal and ever supportive son of UP.”

“Regent Albarracin is being a good example to other alumni who were waiting to be tapped.  His donation also showed that he is not just investing in the institution but in the future of the country as well,” Pascual explained.

He also recalled the words of Murray Simpson Bartlett, the first UP president, “it (UP) can serve the world best by serving best the Filipino.” Through donations, “we embrace the words of Bartlett. Let us be unselfish workers for the common good.”

Albarracin who served as CBA dean from 1981 to 1986 had already donated to several causes not only at VSB but also to the College of Engineering where he earned his bachelor’s degree in 1956.  He consistently supported the projects of the university through donations and fund-raising activities, particularly during UP’s centennial celebrations in 2008, where he served as the vice chairman of the UP Centennial Commission.

Joining Albarracin at the event were his wife Trinidad and son Mario.

The UP Board of Regents, at its 1287th meeting on Apr. 12, 2013 approved the proposal of the business faculty to honor its former dean by renaming CBA to VSB.