Against the flow: Ramos, up close and personal 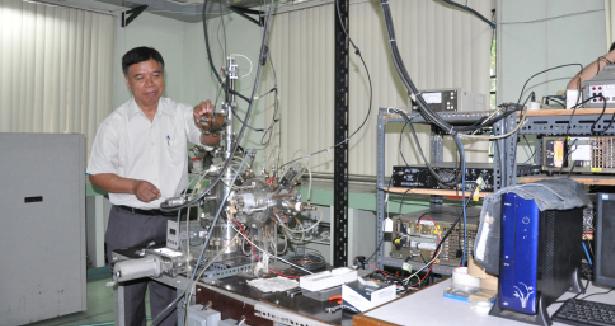 Ramos working on the Plasma Sputter Type Ion Source machine designed for the synthesis of nitrides on metal substrates.

(September-October)—“Do not follow the path of a river because it causes the path of least resistance,” said Dr. Henry J. Ramos..

The quotation best describes Ramos’ journey: from his humble beginnings as an instructor of Mathematics at UP Baguio, to becoming a well-loved physics professor at the National Institute of Physics (NIP) at UPD, gaining international renown as scientist, pioneering the development of Plasma Physics research in the country.

In fact, Ramos is the first UPD scientist whose patented invention under the Technology Transfer Program of the Office of the Vice Chancellor for Research and Development (OVCRD) has been “officially deployed to the market.”

According to Ramos, he took the road less travelled and his being a physicist was largely providential.

“When I got a grant from the Colombo Plan Scholarship, the only available program was in Physics. So I pursued my graduate studies and earned my MS Plasma Physics from Flinders University, South Australia in 1978.”

The University of Colorado Boulder defines Plasma physics as “the study of charged particles and fluids interacting with self-consistent electric and magnetic fields. It is a basic research discipline that has many different areas of application—space and astrophysics, controlled fusion, accelerator physics and beam storage.”

Ramos then returned to UP Baguio and was assigned to teach physics, and in one of the meetings of the Samahang Pisika ng Pilipinas in the late 1970s, he met Dr. Roger Posadas, who was then the chair of the Physics Department at UPD. “Dr. Posadas invited me to teach Physics in UPD,” Ramos said.

His stint at UPD started in 1981. He was assigned to develop a program in plasma physics. He said it was very challenging because there were no research facilities for his discipline. “I think I was the only person into plasma physics in the country at that time. So talagang walang manpower and funding was quite difficult to come by.”

When Ramos became a Visiting Scientist at the Institute of Plasma Physics in Nagoya University (NU) in 1984, he was inspired to come up with a plasma machine, to be built in the Philippines, and to pursue research in plasma physics. That inspiration encouraged him to come up with the blueprint of the machine. “What I needed was to source out the materials to complete it.”

Ramos was referring to the Sheet Plasma Negative Ion Source (SPNIS) machine, the first device he built at the NIP laboratory. Its (SPNIS) fabrication tells of Ramos’ determination to succeed under unfavorable conditions.

Ramos said he looked around for sources of funds to build the machine. “I used my network, it’s just like begging.”

The break came in 1988, when he returned to NU as a visiting scientist. NU, at that time, was upgrading their plasma machines and were replacing all the parts and peripheral equipment of their devices.

Ramos asked his supervisor and the faculty in-charge of the laboratory to give him all the equipment they were about to dispose of.

To cut the story short, Ramos said he was able to acquire about P1.8 million worth of equipment which were shipped to UPD in 1989. He then built the SPNIS which he himself designed, calibrated and made operational.

The accomplishment gave Ramos the impetus to build more machines. “Over a period of 20 years, we have been able to build about 10 devices doing different kinds of industrial applications and we’ve been able to produce something like 50 ISI publications out of these devices,” Ramos said.

From these publications, Ramos received numerous citations, some of which are the UP Scientific Productivity Award in 2007 and 2013, and the 50 Men and Women of Science Award from the Department of Science and Technology in 2008.

The most prominent recognition came in April 2014 when his work on coating technology entitled “Titanium Nitride (Tin) Thin Film Formation on Metal Substrate by Chemical Vapor Deposition in a Magnetized Sheet Plasma Source” was put to commercial use through a “lease of patent” with the Asian Semiconductor and Electronics Technology (ASET) Corporation.

Ramos, the current director of the Project Management and Resource Generation Office of the OVCRD, developed a special way of producing a more economical and effective coating for industrial tools made of metals and alloy by using titanium nitride coating produced by locally manufactured magnetized sheet plasma source.

“TiN coating has many desirable characteristics, giving it an edge over other coating technology. It increases the surface hardness of tools, protecting them from abrasion and the damaging effects of friction during the industrial process. In addition to its non-stick property, it has an aesthetically pleasing yellow color, the ability to maintain the sharpness of tools and provides tools with increased durability, resistance to wear and corrosion, thus prolonging the tools’ lifetime while creating better finishes,” he explained.

Ramos’s success and hard work continues to make an impact because of the importance and dedication he gives to mentoring his students. He has been an active and nurturing mentor to research students of physics and materials science, having advised or co-advised 11 PhD graduates in Physics and Engineering; 47 Master of Science graduates in Physics (42) and Materials Science (5); and 46 BS Applied Physics/Physics graduates.

“Dr. Ramos inspires not only his lab members but also his former students who are now members of the university faculty as well,” says colleague Dr. Michelle Marie S. Villamayor, a University Research Associate at the Plasma Physics Laboratory in NIP.

“Fellow teachers approach Dr. Ramos for advice about how to start their own independent research. They also request collaboration. Professors ask how he made his patent application successful and value his insights regarding the future of science and cutting-edge research in the country,” she adds.

From his struggles with the lack of funds and manpower, Ramos started a program with the dream that other Filipino scientists may also benefit and join him in advancing technology in the country. “I followed a different niche, which is a harder niche: to build my own machine and train more Filipino scientists…I opted to earn my PhD here in UPD kasi I want to prove na kaya natin.”

Ramos believes that when we talk about manpower development but don’t have the machines to do hands-on work, we send people to other countries and eventually lose them. “If we have these machines and then guide and supervise students, the transfer of technology will be handed on from generations to generations, as we realize now.”

Ramos has been with UP for 42 years. With his retirement next year, he leaves a lasting legacy.

The training at NIP has enabled several Filipino scientists to build machines and similar equipment as well as characterize the operations of these machines.

It was a long time coming, but Ramos takes it all in good faith. “Keep on trying. Don’t be disheartened with lack of funds, that’s only in the beginning. You just have to prove that you can do it, hard work takes time,” Ramos ended.