A double win for the UP Volleyball Teams 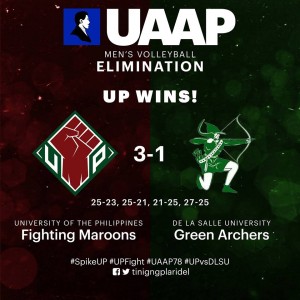 (Feb. 18) —The UP Men’s and Women’s Volleyball Teams posted a double victory in the UAAP Season 78 Volleyball Competition on Feb. 17 at the Filoil Arena in San Juan City.

With a well-balanced offense and good floor and net defense, the Maroons dealt DLSU its third straight loss in the season.

Wendel Miguel and rookie Mac Millete paced UP with 15 and 13 points, respectively, to give the Fighting Maroons its third consecutive victory, placing them at the top of the team standing together with Ateneo de Manila University (ADMU) and National University. 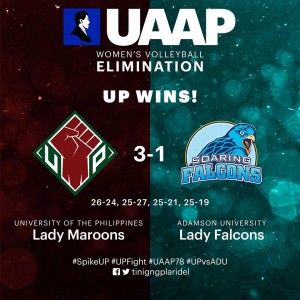 The win halted the 2-game losing streak of the UP Lady Spikers and took the fourth spot with a 2-2 record.

UP Men’s Team next game is against ADMU, while the Lady Maroons will take on the Far Eastern University, both on Feb. 20, at the Mall of Asia Arena in Pasay. — Bino Gamba

Featured image from nowhere to go but UP

Tinig ng Plaridel and nowhere to go but UP