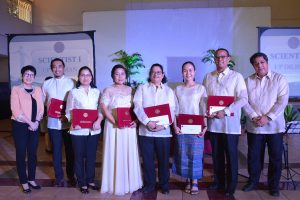 UP recognized the hard work and exceptional research productivity of its faculty members by appointing 71 of them as UP Scientists of various ranks under the Scientific Productivity System (SPS) in ceremonies at the Ang Bahay ng Alumni on Mar. 21. 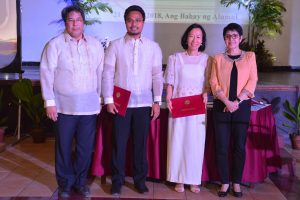 Dr. Alonzo A. Gabriel, from the College of Home Economics, is the lone Scientist III recipient from UPD.

The SPS was created by virtue of its approval of the UP Board of Regents at its 1199th meeting on Aug. 26, 2005.  SPS supports the development of science and technology and encourages and rewards scientific productivity. 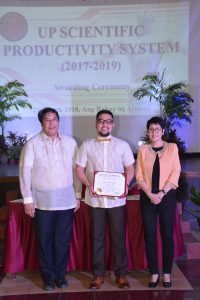 The SPS implementing guidelines states that regular faculty, full time faculty, research faculty and Research Extension and Professional Staff (REPS) in active service who belong to the scientific disciplines such as basic/natural sciences and mathematics, engineering and information and communication technology, medical sciences, agricultural sciences, selected fields of Social Sciences, library and archival sciences and scientific and technical documentation, may be considered for the title of UP Scientist. Nominees must have at the minimum a Ph.D. degree or MD with MS/MA degrees.