4 athletes of the year at UAAP 78 closing 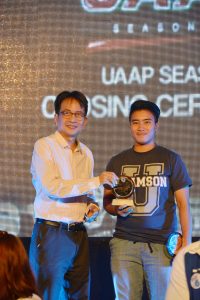 Sabobo (right) with Chancellor Tan; below is the turnover rite to UST.

The University Athletic Association of the Philippines (UAAP) gave the Athlete of the Year to not one, but four athletes, at the awarding and closing ceremony of Season 78, making it a first in the history of the athletic association.

The award is a back-to-back win for Lariba who was the UAAP Season 77 Athlete of the Year.  The star athlete also qualified for table tennis at the Olympics and is bound for Rio this August.  Valdez, the 3-time most valuable player (MVP) from ADMU, was commended for her athletic achievements as MVP, Best Scorer and Best Server in Volleyball.  Sabobo, for her part was acknowledged for being Season MVP, Most Home Runs, Most Batted In, Best Slugger and Final MVP in Softball; and Lacuna for being MVP, Champion and for earning seven gold medals and posting four UAAP records for swimming. 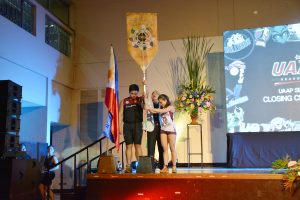 The four were chosen from a roster of athletes that demonstrated exceptional performances in their fields and later were narrowed down to 15 candidates for the award.  UAAP also honored the athletes who participated in international competitions, rookies of the year, MVPs and the athlete scholars.

Participants to the event also witnessed the turnover of the UAAP hosting from UP for Season 78 to the University of Santo Tomas (UST) for Season 79.  UPD Chancellor Michael L. Tan who gave a message to the athletes at the awarding ceremony formally turned over to UST through Rev. Fr. Ermito G. De Sagon, O.P. the hosting duties for UAAP Season 79.