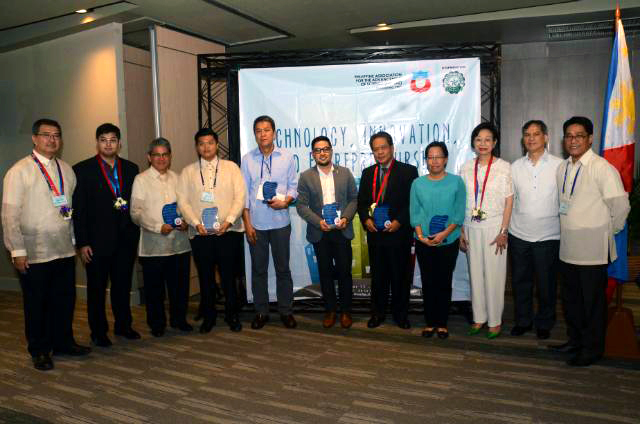 (SEPT. 16)—Dr. Benito M. Pacheco and Dr. Susan Pancho-Festin of the College of Engineering and Dr. Alonzo A. Gabriel of the College of Home Economics are three of the awardees of the Philippine Association for the Advancement of Science (PhilAAS) at this year’s annual convention entitled “Technology, Innovation and Entrepreneurship.”

Pacheco, the UP Diliman (UPD) vice chancellor for academic affairs, was the first recipient of the David M. Consunji Award for Engineering and Research (DMCAER) for his significant contributions in science and technology through his body of works in engineering research and its applications, most notable of which is his research in disaster risk management.

The award recognized outstanding researchers in the field of Engineering.  It was recently established by PhilAAS and the DMCI Holdings, Incorporated.

According to PhilAAS, Pacheco “has been working mainly on the effects of vibration, earthquake, severe wind and fire,” and he also coordinates projects on flood risk.  It was Pacheco who in 2013, led a multi-hazard, multi-disciplinary and multi-sector study on the vulnerability of buildings in Metro Manila due to earthquake, severe wind and flood.

Another multi-disciplinary research program Pacheco leads in UPD is WHATSUP or Weather and Hazard Alert and Tracking Systems for Urban Areas of the Philippines.  This is a program on disaster risk communication by internet and mobile apps.

Pacheco holds the record of being the first non-Japanese graduate to be immediately appointed to the faculty of a national university in Japan.  He holds the distinction of being an honorary fellow at the University of Tokyo’s School of Engineering.  He is a faculty of the Institute of Civil Engineering of the UPD College of Engineering with the rank of Professor.

Meanwhile, Pancho-Festin is the recipient of the PhilAAS Esther A. Vibal Award for Educational Technology Innovation.  The award is in honor of the chairperson of Vibal Group of Companies.  Esther A. Vibal’s leadership is recognized for transforming the company into the premier technology solutions provider for Philippine schools and government.

Pancho-Festin is credited for establishing the Computer Security Group at UPD.  This has also been the venue for students to pursue research projects on security in computer applications, and according to PhilAAS, the Computer Security Group “since 2002 have graduated more than a dozen graduate students some of whom are Department of Science and Technology-Engineering Research and Development for Technology (DOST-ERDT) scholars.”

The 2008 Gawad Chanselor Natatanging Guro, she is also recognized for introducing and teaching courses that highlight the increasing need to consider security in the present computer applications.

She spearheaded the Learning English Applications for Pinoys (LEAP), the project which addresses the gap in basic English skills of Filipino students.  She has also been involved in several DOST-(Department of Science and Technology) funded projects that “has provided augmented learning using computer-based solutions.”

Pancho-Festin is a senior member of two international professional organizations, the Institute of Electrical and Electronics Engineers, and the Association for Computing Machinery.

Completing the triumvirate of winners is Gabriel, who received the Gregorio Y. Zara Award for Applied Research.

The Gregorio Y. Zara Awards for Basic Science Research and for Applied Science Research were established in 1968 to honor one of the most outstanding National Scientists of the Philippines, and to serve as inspiration for Filipino scientists and researchers.

Gabriel was recognized for his researches in food science and technology, two of which are “Ultraviolet-C-Based Processing of Young Coconut Liquid Endosperm,” and the “Heat-Sensitizing Effects of Vanillin and Organic Acids on Pathogens in Coconut Water.”

Gabriel is an associate professor of food science at the College of Home Economics, Department of Food Science and Nutrition, and is a member of various professional societies, among them the Saint Gallen of Japan, European Society of Clinical Microbiology and Infectious Diseases, Germany, and the International Association for Food Protection, USA.  He obtained his PhD in Bio-functional Science and Technology (Food Microbiology and Hygiene) from Hiroshima University in Japan.

PhilAAS is a non-profit national organization that aims to promote and broaden the base of scientific advancement in the Philippines.  For its 63rd annual convention, PhilAAS has five awards: The Gregorio Y. Zara Awards for Basic and Applied Science, Dr. Paulo C. Campos Award for Health Research, Esther A. Vibal Award for Educational Technology Innovation, LEADS AGRI Award in Agricultural Research, and the David M. Consunji Award for Engineering Research..—Photo courtesy of http://www.gmanetwork.com/news/photo/67568/philaas-fetes-pinoy-scientists-and-researchers