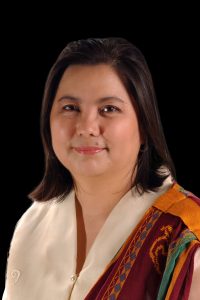 (JUL. 6)—Prof. Evangeline C. Amor, PhD and Ma. Theresa T. Payongayong, PhD, have been appointed to head the offices of the Vice Chancellor for Academic Affairs and the University Registrar, respectively.

Amor, a professor at the Institute of Chemistry of the College of Science, served as University Registrar from April 2011 to April 2015.

She earned her doctorate, Master of Science and bachelor’s degrees in Chemistry from UPD in 2003, 1998 and 1989, respectively. She received a fellowship from the Center for Advanced Sensor Technology, Chemical and Biochemical Engineering Department, University of Maryland at Baltimore County, Maryland, United States from September to December 2006, as funded by the Organization for the Prohibition of Chemical Weapons.

Her appointment was approved by the UP Board of Regents at its 1328th Meeting on June 16.  She succeeds Prof. Benito M. Pacheco, PhD, who assumed the post in March 2014.

Amor serves at the pleasure of the UPD Chancellor. Among her recent publications are “Pamimilosopiya: Mga Pagdulog at Konsepto” with Perseville U. Mendoza and Jeaneatte L. Yasol-Naval, published in August 2011 by UP Sentro ng Wikang Filipino; and “Anyo ng Mapanuring Pag-iisip at Moral Kompas sa Pilosopiya 1” with the same co-authors and published in Vol. 67 Special Issue of the Philippine Social Sciences Review in 2015.

She also received a special citation from the United Nations Population Fund in 2009 for the animated film “Si Leo ang Batang Lito,” Philosophy for Children story produced by Cine-Indie for MDG.

She is a lifetime member of a number of professional organizations, among them the Women’s Studies Association of the Philippines and ADHIKA ng Pilipinas.

She succeeds Dr. Marilyn R. Canta, who was appointed to the post in May 2015.