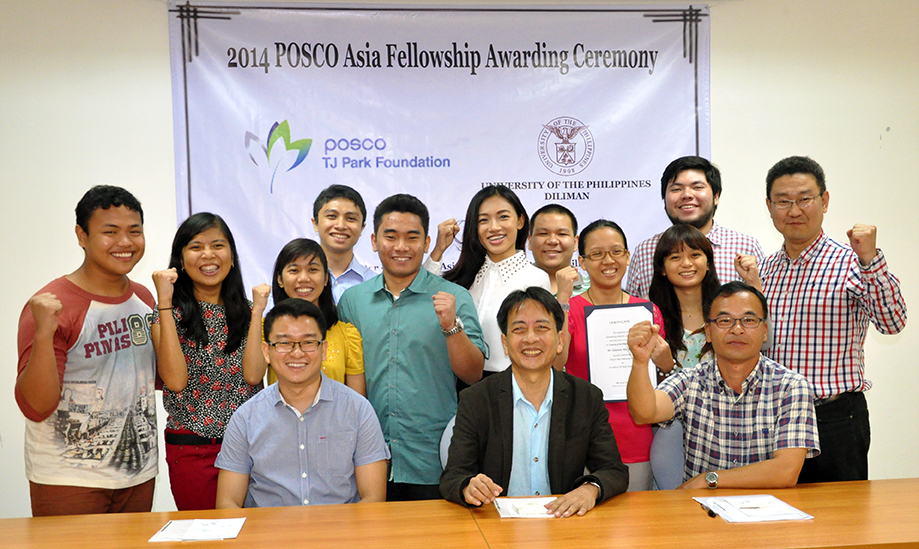 POSCO scholars receive a monetary support of $700 for one year or $350 per semester. The amount will be given in peso equivalent upon deposit of remittance by the donor effective first semester of Academic Year 2014-2015.

Tan thanked POSCO for their continuous support to the university. “The needs of the students are just so tremendous including students who are to borrow P5,000. It seems like a small amount but even that amount has to be borrowed. The needs are so great and I am very grateful to POSCO for helping to support our students here. Every centavo, every peso counts and goes a long way. I hope we will continue to work with POSCO, not just in this program.”
POSCO Asia Fellowship program has been awarding financial support since 2008.

Cho, for his part, said supporting the students is POSCO’s commitment “to contribute for better societies by fostering leadership for the next generation in Asian communities based on mutual trust and respect and commit [themselves] to social responsibilities. The foundation has been focusing on developing our international scholarships programs in Asia under the name of POSCO Asia fellowships. The Posco Asia Fellowships carries out one of the foundation’s core missions which is to recognize Asia’s most talented young people and support them and the Philippines is no exception.”

On behalf of their fellow scholars, Mark Romeo B. Aquino and Atanacio expressed their gratitude to POSCO.

Aquino, a 3-time recipient, said “I am very grateful for this opportunity to finally thank the people who have opened more doors of possibilities for me and my family. My POSCO scholarship helped us a lot since there are currently three college students in our family and my parents would have had to work night and day to support us. POSCO also inspired me to be a more productive student and thereafter, a more productive citizen of the country.”

Atanacio, who is a first time recipient of the POSCO scholarship, said “The assistance the foundation will give not only benefits me but my family. Having many siblings, most of which are also currently in college, I always wanted to find ways to help my parents with a noble task of sending us all to good schools and this was a perfect opportunity. Furthermore, it gives me greater reason to study harder. I am once again reminded of the fact that my education is due only to the generosity of others.”

POSCO, the world’s leading steel company established in 1968, is now on its 8th year of helping UPD students through the POSCO TJ Park Foundation. The foundation was established as a global non-profit organization in September 2005. Under the POSCO Asia Fellowship program, the foundation provides scholarships, facilitates research activities and sponsors literary works with the aim of enhancing mutual understanding and collaborative exchanges among Asian countries.

To qualify for the POSCO scholarship, applicants must be undergraduate students with a general weighted average of 2.0 or better and must have carried a load of at least 15 units.