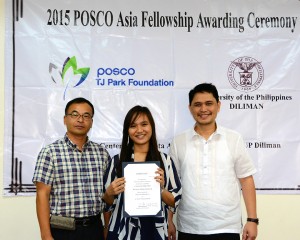 The awarding ceremony was held at the Hall of Wisdom of the Asian Center/GT Toyota Asian Cultural Center on Mar. 31.

POSCO scholars receive monetary support of $700 for one year or $350 per semester. The amount is given in its peso equivalent per semester.

Of the 15, one is a new recipient and 14 are continuing scholars.

“I am very happy to meet you here again and may be next year we’ll hold the ceremony in our company in Batangas,” Cho said.

He added “I hope you make the best of yourselves and become the leaders of the Philippine and Asia. Once again, I congratulate all of you for being selected as POSCO Asia Fellows.”

Santillan thanked POSCO for their continuous support to the university.

On behalf of their fellow scholars, Albao, Lau and Presto expressed their gratitude to POSCO.

“I would like to thank the POSCO-TJPF for their invaluable financial support for my studies. Their support has been a very big help for my family for the past 3 years and I hope to graduate this June. I look forward to give back and to help provide others the same opportunities that POSCO-TJPF has so greatly provided me,” Albao said.

Lau said “This foundation has touched and is continuing to touch the lives of many people… This assistance actually benefits my family. I have younger siblings who are still in high school so, this is a great opportunity for me to be able to help my parents already even as a student. In addition, this scholarship inspired me to work harder.”

Presto, a new recipient of the scholarship said “I was super blessed to have been given financial support and I thank POSCO for that. I have actually gone home to Ilocos but I came back just to thank the people who have given me a new reason to take my academics seriously.”

The POSCO Asia Fellowship is one of POSCO-TJPF’s core programs that provides students with scholarships and facilitates research activities of researchers with the aim of enhancing mutual understanding and collaborative programs among Asian countries.

To qualify for the POSCO scholarship, applicants must be undergraduate students with a general weighted average of 2.0 or better and must have carried a load of at least 15 units. Students must not be enjoying any other scholarship at the time of the award.

Interested students may apply for the scholarship at the OSSS.