By Chi A. Ibay, images by Jefferson Villacruz 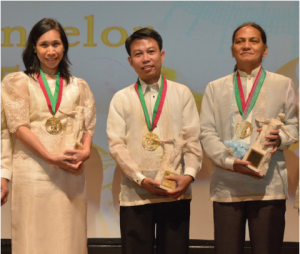 Twelve individuals and a residential area on campus received the Gawad Tsanselor, the highest recognition bestowed by UP Diliman for excellence and outstanding accomplishment.

Selected by a jury of peers, the individual awardees include three professors, four REPS, one researcher in Filipino, three students and one administrative staff. This year, the award was re-spelled in Filipino from the 1995 title of Gawad Chanselor. With the new name came a new venue: the Institute of Biology Auditorium at the National Science Complex.

Each awardee received a cash incentive and a trophy depicting a sculpture of the Oblation as a work-in-progress, ‘non-finito’. Designed by College of Fine Arts professors Jamel Joseph A. Obnamia and Jose Manuel L. Sicat, the 13-inch polyester resin trophy represents the awardees’ continuing service to the University and the nation. The trophy made its debut in the 2014 Gawad Chanselor program.

In his welcome remarks, UPD Chancellor Michael L. Tan briefly walked the audience through the award’s 20-year history, noting the changing categories and fluctuations in the number of awardees throughout the period. He also pointed out the number of awards garnered by the academic units, noting that CS has the highest number of Guro and REPS awardees. He also said a number of units had none or only one awardee.

Tan made a few suggestions. The first was to include constituents of the UP Integrated School in the nominations; the second was to be more proactive in looking for potential awardees and tapping into the SET (Student Evaluation of Teachers) scores. He said there is a need to make the awardees more visible as models for UP by having them give talks in seminars or present papers in a symposium. 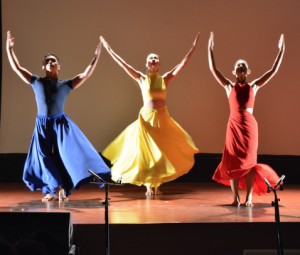 Livening up the ceremony were performances by the UP Dance Company, the UP Filipiniana Dance Group and the UP Staff Chorale. The event was organized by a steering committee headed by Vice Chancellor for Academic Affairs Benito M. Pacheco, with the vice chancellors for Administration, Research and Development, Student Affairs and Community Affairs as members, along with directors of the offices for Instruction, Information, Human Resources and Initiatives in Culture and the Arts. The artistic program was helmed by Prof. José Estrella of CAL’s Department of Speech Communication and Theatre Arts.