(JUN. 19)—Music filled the Balay Tsanselor in the morning of Independence Day as the Voices of Aloha of the University of Hawai’i at Mānoa (UH-Mānoa) paid the Chancellor a visit as part of a tour of the Philippines from Jun. 8 to 17.  UP Diliman was the fourth stop on their 8-leg performance.

The concert was not originally meant to celebrate Independence Day, said College of Music (CM) Dean Jose Buenconsejo.  It was actually the only available date that Voices of Aloha can interact with UPD’s choirs.  And Jun. 12 being a holiday, Balay Tsanselor proved to be the perfect venue for this intimate gathering. 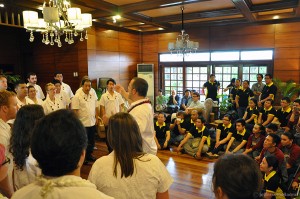 Voices of Aloha is an ensemble of students and alumni of the UH-Mānoa.  Considered as the University’s most selective choral ensemble, its singers are members of some of Honolulu’s most prominent choirs.

The choral ensemble visited UPD in recognition, among others, of UH’s close academic ties with the university.  Many of UPD’s faculty members are UH alumni.

“Many faculty members of the CM had their PhDs in UH, like Dr. La Verne dela Peña and the late Prof. Elmo Makil,” said Buenconsejo, himself a UH alumnus.

Joining the Voices of Aloha at the gathering were the UP Concert Chorus (Korus) and the Novo Concertante Manila.  Korus is the university’s official choir and the pioneer of choreographed chorale in the country, while Novo Concertante Manila is a chamber choir established in 1998 and based in New Manila.  It also serves as a laboratory choir for choral conducting students of CM.

The choral ensemble from Hawai’i performed an array of songs that represented the various traditions or influences of the American music known today.

Prof. Miguel Felipe, Voices of Aloha conductor said the songs are “a musicological tour of what the American music is.”

From the European tradition, the Voices performed Thomas Tallis’s “If ye love me.”  This was followed by the haunting “Man of Constant Sorrow” as arranged by Jeffrey Douma.  From the Hawaiian tradition was the song “Ku’u Pua i Paoakalani,” as arranged by Robert U. Cazimero from the original work of Hawaiian royalty Queen Lili’uokalani; and from the African-American tradition, the moving “Fix Me, Jesus” as arranged by Augustus O. Hill.  This was followed by the American pop songs  “Bridge over Troubled Water” by Paul Simon arranged by Vince Peterson and “Light of a Clear Blue Morning” by Dolly Parton.  The group ended their performance amid the clapping and encouragement of the audience with their singing of the folk song, “Ezekiel saw the Wheel,” which is about the prophet Ezekiel’s divine vision as mentioned in the Old Testament book Ezekiel of the Bible.

Prof. Arwin Tan of the College of Music and conductor of Novo Concertante Manila best described the group’s performance as full of “wonderful vocal colors.” 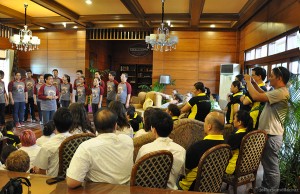 Meanwhile, the Korus under the baton of Prof. Janet Sabas-Aracama and the Novo Concertante Manila themselves gave powerful performances that earned them standing ovations from the guests. 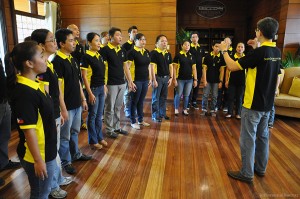 Meanwhile, Novo Concertante Manila began their repertoire with the poignant hymn, “My Lord What a Morning.”  The choir followed this up with an impressive and heart-stopping rendition of the vocally-challenging Maguindanao folk song, “Pamugun,” about a sparrow and a hunter.  In answer to the Voices of Aloha’s and Korus’ cover of pop songs, Novo covered Ryan Cayabyab’s “Paraiso” made popular by the singing group Smokey Mountain and capped it with the upbeat Brazilian song “Mas que Nada” by Jorge Ben, which became the signature song of Sérgio Mendes.

UPD Chancellor Michael L. Tan said the groups’ performances and there mere presence itself brought in “life” to the otherwise quiet and almost lonely Balay Tsanselor.  He expressed his hope that such event be reprised at the Balay.