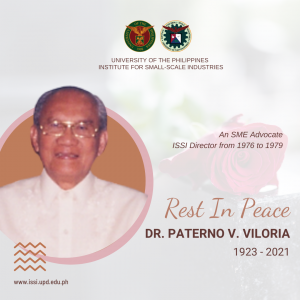 Image from the UPD Institute for Small-Scale Industries Facebook page

Former UP Institute for Small-Scale Industries (ISSI) director, Paterno V. Viloria, Ph.D. passed away on Sept. 22. He was 97.

Viloria started working in ISSI in 1968 and became its third director from 1976 to 1979. During his term as ISSI director, Viloria co-founded the Small Enterprises Research and Development Foundation (SERDEF), a private company recognized as one of the pioneers of small and medium enterprise (SME) growth. IISI forged an alliance with SERDEF to undertake pilot and demonstration programs that led to responsive projects and activities for SME development. SERDEF still holds office at the UP ISSI. Viloria served as its president from 2002 until the time of his death.

After his stint at the ISSI, Viloria joined the World Bank as international consultant on small business development, which took him to consultancy engagements in Sri Lanka, Bangladesh, Indonesia, and Nepal.

“PV,” as he is fondly called by his friends and colleagues, has a track record of more than 45 years in the promotion and development of SMEs, and entrepreneurship in developing countries in various fields such as SME financing, human resources development, project management, enterprise development, project appraisal and evaluation, and countryside development and appropriate technology.

From 1971-79, Viloria taught graduate courses in human behavior in organizations, interpersonal relations, business policy, entrepreneurship, and project management at the University of Santo Tomas (UST), De La Salle University, San Sebastian College, Ateneo Graduate School of Business, and at the UP Tacloban. He was also associate professor from 1965-1979 at the University of the East.

In 1989, Viloria received the US Bronze Star Medal from the United States Armed Forces in the Far East (USAFFE), and in 2018, he was one of the 13 Filipino World War II veterans awarded with the US Congressional Gold Medal for his valuable support to the US Rangers in the rescue of American prisoners of war from the Cabanatuan Prison Camp. (https://pvao.gov.ph/u-s-congressional-gold-medal-awarded-to-filipino-wwii-veterans/). The congressional gold medal is the highest civilian award given by the US Congress to a person or unit for an outstanding deed or act of service to US security, prosperity, and national interest.

Viloria earned his Ph.D. in commerce from UST in 1979, his master’s in business administration from UP Diliman in 1962, and his bachelor of science degree in commerce from the Far Eastern University in 1949. He also has a diploma in international course on small-scale industries management from the Research Institute for Management, Delft, The Netherlands (1969) and a certificate in smaller industries management from the Nagoya International Training Center, Nagoya, Japan (1973).

Viloria is survived by his wife Candida, and daughters Sarah Jane and Dinah.