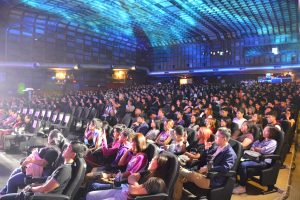 (AUG. 8)—UP Diliman (UPD) welcomed more than 2,000 freshmen, graduate students and transferees at the University Welcome Assembly (UWA) held from Jul. 30 to 31 at the UP Film Center.

UWA, formerly known as the Freshmen Welcome Assembly, is a yearly tradition organized by the Office of the Vice Chancellor for Student Affairs (OVCSA) to introduce freshmen (freshies), graduate students and transferees to administration officials and treat them to a showcase of best performances from UPD’s homegrown talents. 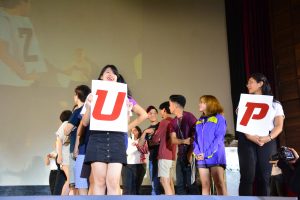 According to OVCSA, the welcome assembly this year was moved to the UP Film Center due to the ongoing renovation of the University Theater and became a 2-day event, with morning and afternoon sessions, accommodating a total of 2, 302 new students from UPD’s 27 degree granting units. 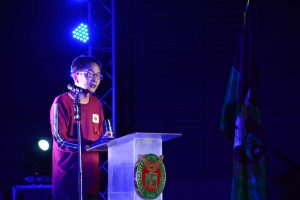 The program opened with the entrance of the UPD and college officials followed by the singing of the National Anthem. 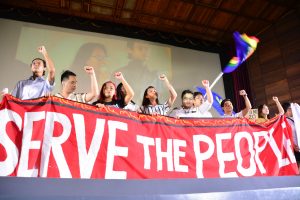 UPD Chancellor Michael L. Tan, in his opening remarks, called the new batch of freshies as “Izkos” and “Izkas” (spelled with a ‘z’ instead of ‘s’), since most of them belong to the Generation Z who were born after the year 2000.

Tan said while he is happy that the new generation is more adept with the latest gadgets like cellphones, tablets or iPads, “We also worry that problems are starting to emerge from these technologies and for this generation, we want UPD to help you become a Generation Z that is not too addicted to your tablets and phones.”

As in the previous year, Tan gave the new students tips to survive and thrive at UPD: 1) love yourself more, 2) eat well and eat slowly (less salt, less instant noodles and more fruits and vegetables), 3) sleep at least seven hours each night, 4) keep moving, 5) sit and meditate, 6) take breaks from time to time, 7) read old fashioned books and newspapers again, 8) write more or take down notes and text less, 9) listen more and talk less, 10) ask questions, 11) love others and appreciate people in your lives, 12) join organizations, 13) go into relationships, and 14) love UP. 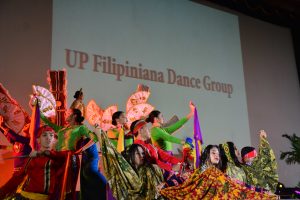 An advice from the Chancellor that elicited laughter was “When you go into relationships, one piece of advice, huwag ninyong i-tattoo ang pangalan sa katawan ninyo. Kasi love is not forever definitely if it is this early.”

He presented a kit containing reusable utensils (fork, spoon, chopsticks and metal straw) and said “We hope that with time, this will become standard gear for all UPD students.”

Meanwhile, a video of UP President Danilo L. Concepcion’s message to the new students was shown at the program. 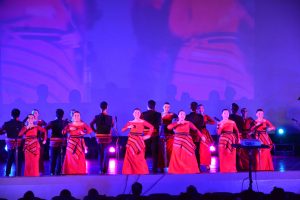 The freshmen were later introduced to the UPD officials with great pride by their respective college deans. Freshies from different colleges were either wearing color-coordinated shirts or creative head gears while some brought props like balloons, cardboard letters of their college’s acronyms and banners. They also responded to their dean’s introduction with their respective college cheers.

Speaking on behalf of the students were Kristine Bernadete Q. Nuñez and Mathieu Alonzo. 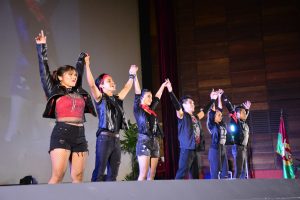 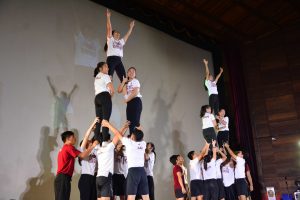 University Student Council Chairperson Sean Angelo Thakur and Vice Chairperson Kenneth Eser Jose later introduced the USC members and College Student Council. It was followed by a passionate speech from the student activists who went on stage to air protests against several issues in the country such as the Philippine’s sovereignty over the West Philippine Sea, extra judicial killings and free tuition fee for all, among others.

As part of the welcome treat, the event showcased performances by the UP Concert Chorus, UP Dancesport Society and the UP Varsity Pep Squad.

The event was hosted by CAL professors Marvin Ray Olaes of the Department of Speech Communication and Theatre Arts and Jovy Peregrino, PhD of the Departmento ng Filipino at Panitikan ng Pilipinas.

The program culminated with the singing of “UP Naming Mahal.”