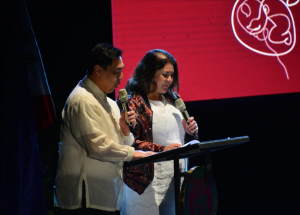 (MAR.1)— UP Diliman (UPD) honored its University Scholars (US) in the undergraduate and graduate levels and students who excelled in various fields at the “Parangal sa Mag-aaral 2020” on Feb. 26 at the University Theater. 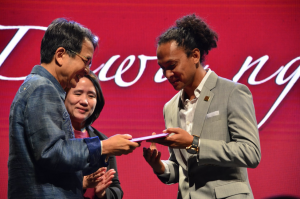 The UP Volunteers for Children received the Ignacio B. Gimenez Excellent Student Organization Project Award and P50,000 cash prize for their project “Playtime.”

The “Diwa ng Diliman Award” was presented to UP Track and Field Team (UPTFT) head coach Rio Dela Cruz for his all-out support to the UPTFT. 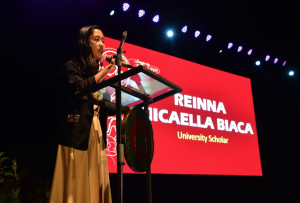 Program. The Parangal program lasted for two and a half hours featuring spectacular performances from the UP Repertory Company, UP Concert Chorus, Legato Visual Performing Arts and Amiel at James, the acoustic duo from the UP Institute of Mathematics. 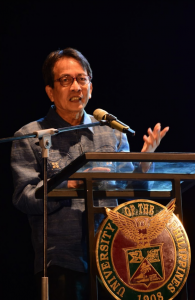 Meanwhile, six students representing the US, student artists, athletes, delegates and volunteers, and board topnotchers spoke on behalf of all the student achievers.

The student achievers were called per category and were asked to rise from their seats to attach their respective pins.

The awardees made an oath to maintain their excellence in academics, volunteerism, competitions, sports and arts. This part of the program started in 2019.

In addition to the certificate of recognition, all the awardees received a Parangal sa Mag-aaral pin and were given two special tokens.