UPD’s Carillon to break its silence for press freedom 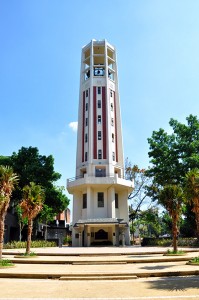 (MAY 8) ̶ UP Diliman (UPD) once again breaks its silence in light of the National Telecommunications Commission’s (NTC) Cease-and-Desist Order (CDO) against ABS-CBN Corporation.

The Carillon bells will toll today at 6:30 p.m. in support of press freedom and in solidarity with the ABS-CBN employees.

ABS-CBN reports NTC ordered the network to stop its broadcast operations “due to the expiration of its congressional franchise” on May 4.

The UP Carillon Tower, between the University Theater and the UP Film Institute along Osmeña Avenue, was designed by National Artist for Architecture Juan Nakpil and was constructed in 1952.  It originally housed 46 bronze bells cast by Van Bergen Bell, Chimes and Carillon Foundry of Holland.

Through the years, the 130-foot structure became a symbol of UP’s solidarity in most pressing issues of the country.

During the 1970 First Quarter Storm, the UP Carillon Tower served as watchtower for students and faculty.  They would ring the bells when they see police and soldiers trying to enter the campus through the University Avenue.

Presently, ABS-CBN questions the CDO before the SC and seeks a temporary restraining order.