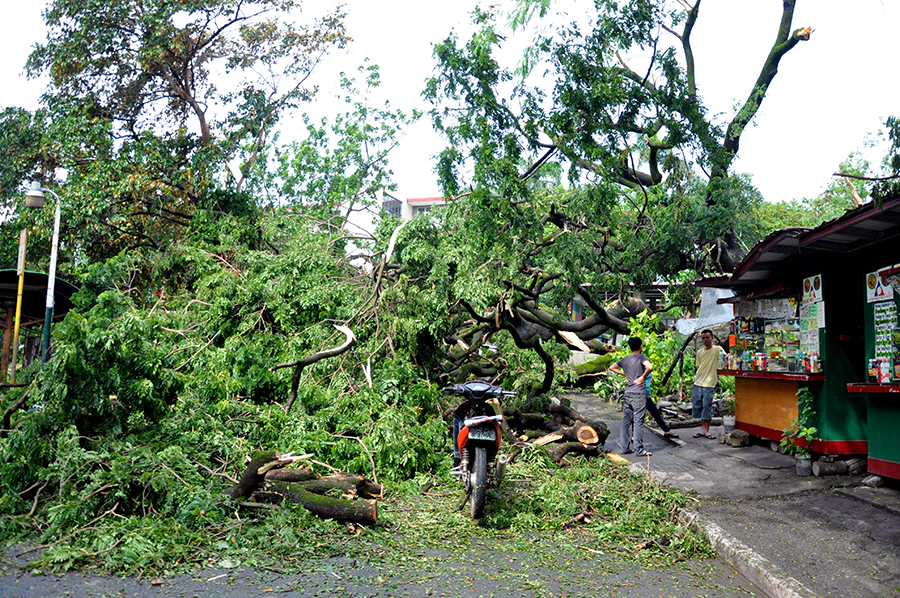 (JUL. 21)—In the morning of Wednesday, Jul. 16, residents of UP Diliman (UPD) woke to howling winds and heavy rains. Typhoon Glenda was barreling  through Metro Manila with winds of up to 185 kilometers per hour.

Less than 24 hours later, in the afternoon of Jul. 16, Glenda had exited land. At UPD, it blew away the roof and shattered glass windows in many academic and residential structures, toppled electric posts, uprooted trees and felled hundreds of branches in many trees on campus. The last time a storm hit UPD this hard was in 2006 when Typhoon Milenyo swept through the country.

Despite the havoc it wreaked, no casualties or serious injuries were reported by the University Health Service (UHS).

Damages. Almost a week after the devastation, the Office of the Vice Chancellor for Community Affairs (OVCCA) is still taking stock of the extent and actual cost of the damage wrought by the typhoon. According to initial estimates by Campus Maintenance Office (CMO) acting director Engineer Alden C. Aynera, an estimated 100 trees were uprooted by the typhoon, composed mostly of non-indigenous and fruit-bearing trees.

Nearly all major and minor roads on campus were rendered impassable to vehicles by either fallen trees or fallen electrical posts.

The administration was quick to respond. As soon as the weather allowed on the afternoon of Jul. 16, UPD residents and administrators had jumped into action, with some working well through the night.

The CMO and Barangay UPD launched a massive cleaning operation that continues up to this time. UPD officials were aided by the local barangays, the Metro Manila Development Authority, the Armed Forces of the Philippines and Meralco in the form of equipment and manpower. Quezon City Hall sent in haulers on Thursday, Jul. 17.

First in their priority list was the clearing of major roads which was accomplished within 12 hours after the typhoon struck. Almost all of UPD’s roads are now passable.

Aynera adds that three trucks are now circulating through the campus, collecting debris and bringing these to three materials recovery facilities inside UPD. He expects the clearing operations to be over before Aug. 4.

A major consequence of all the fallen trees was the snapping of power lines. Almost all of UPD went dark. For a few days, the UHS operated on emergency lights because its generator was not working.

Classes and work in offices, except for those providing basic services, were largely suspended. Classes at the UP Integrated School were suspended until Jul. 22 by a joint decision of the Chancellor and its Principal, Prof. Ronald San Jose.

For its part, the University Computer Center immediately began work restoring the Internet connection. By Friday afternoon the North portion of the campus network was up and running, but the South portion including Quezon Hall (South and North wings), the EEE/Engineering Complex, the National Science Complex, Palma Hall, Faculty Center, College of Arts and Letters building, Information Technology Development Center/NISMED, Executive House and the adjacent building comprising the Colle of Fine Arts, Villadolid Hall, Office of Campus Architect, Supply Property and Maintenance Office and the CMO were still waiting to be connected as of 11 a.m on Friday, Jul. 18.

Students. The UPD administration was not alone in cleaning up the campus. Student volunteers, both individual and those led by the University Student Council (USC), brought equipment  and immediately helped clear the academic oval of debris. Several student organizations heeded the call, including one from neighboring Miriam College.

At the same time the USC continued their IskoOperations, a relief operations program initiated by the USC in coordination with volunteer organizations in the university.

Future Plans. Even as the cleaning operations were being conducted, on Jul. 17, the Chancellor convened a meeting of key officials to assess the damage and plan for future quick responses.

There it was agreed that a new office—the Office of Public Safety—be created to take charge of disaster preparedness. While the office is still under proposal, the key person to be contacted during calamities such as typhoon Glenda should be the Chief Security Officer (CSO), Atty. John Baroña.

Immediate measures to be implemented include: the urchase of generator sets and emergency lights for key offices, namely: UHS, UP Police, and the dorms; purchase of more chainsaws and other equipment for removing obstructions; a communications system with the CSO as a hub for reports, and the Diliman Information Office (DIO) for dissemination and mobilization of disaster response teams in all units of Diliman, including a campus-wide drill for simulated disasters.

The DIO has been using the Smart Infoboard for SMS blasts.They are also using Twitter and Facebook, but the morning of the typhoon these services were limited because of the electric outages.

The Chancellor said there is a need to review policies around trees. Most of the trees that fell were acacia, Gmelina and non-indigenous species. Pruning and tree replanting policies will have to be carefully planned. —Anna Kristine E. Regidor, images by Leonardo A. Reyes