(JUN. 21)— UP Diliman (UPD) paid its student achievers tribute at the Parangal sa Mag-aaral 2019 held at the University Theater on Jun. 19.

This year, UPD honored 4,302 University Scholars (US) in the undergraduate and graduate levels and students who have distinguished themselves in various fields.

The five academic units with the most number of US are the College of Engineering (COE) with 829 awardees, College of Social Sciences and Philosophy (CSSP/578), Cesar E.A. Virata School of Business (VSB/412), College of Science (CS/323) and College of Arts and Letters (CAL/309). 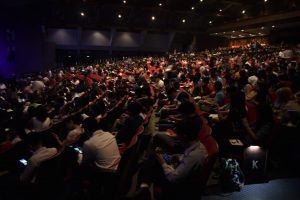 In the graduate level, COE again topped the list with 106 followed by CS (75), College of Education (56), School of Urban and Regional Planning (45) and Technology Management Center (43).

UPD also recognized graduates who made it to the top 10 in the licensure examinations for lawyers, architects, teachers, accountants, librarians, chemists, geologists, chemical engineers, electronics engineers, electrical engineers and geodetic mechanical engineers; together with those who have distinguished themselves in other fields; and winners in national and international competitions. 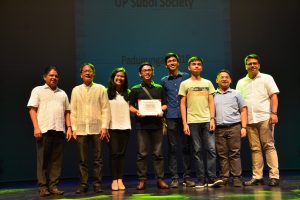 The UP Subol Society received the Ignacio B. Gimenez Excellence Award and a cash prize of P50,000 for their project “Padunungan 2018.”

Meanwhile, the total number of US this year increased by 554 students or 14.78 percent compared to last year.

In addition to the certificate of recognition, the awardees also received a Parangal sa Mag-aaral pin designed by Kevin Brandon E. Saure, a CSSP graduate student and staff of the UP Diliman Information Office. Students who attended the awarding ceremony were given an additional UPD journal as special token. 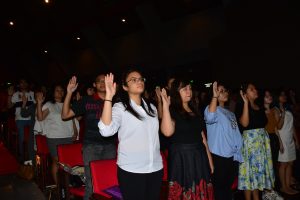 Program. During the program, students, parents and other guests were treated to an afternoon of spectacular song and dance numbers from award-winning performers, namely: the UP Dance Company, CONCHORDS, Legato Visual Performing Arts, Raymond Roldan and the UP Concert Chorus.

Five student representatives spoke on behalf of all the student achievers.

Ina Marie Claire E. Mallari of the National College of Public Administration and Governance spoke on behalf of the US; Carl Angelo M. Caluag of the Institute of Chemistry for the board topnotchers; Joshua James N. Versola of the Department of Science and Technology (DOST) Scholars Association for the student volunteers; Julius Czar B. Torreda, Galactic Impact Awardee (National Aeronautics and Space Administration, NASA Space Apps Challenge 2018 Global Competition), for the national and international competitions winners and participants, and UP Men’s Basketball Team member Diego Miguel Dario for the student-athletes.

The Parangal this year was again shorter compared to previous years. The student achievers were called per category and were asked to stand up from their seats and attach their respective pins.

In addition, the awardees were asked to take an oath to maintain their excellence in academics, volunteerism, competitions, sports and arts, a new inclusion to the annual Parangal ceremonies.

PASP, VACSSP and CTGACH. Although not mentioned during the program, the Parangal also recognized the recipients of the Performing Arts Scholarship Program (PASP), Visual Arts and Cultural Studies Scholarship Program (VACSSP) and Critical Thesis Grant in the Arts, Culture and Humanities (CTGACH) of the Office of the Chancellor administered by the Office for Initiatives in Culture and the Arts (OICA).

For the PASP, 29 students who belong to six performing groups were given the scholarship—three from the UP Concert Chorus, UP Dance Company (6), UP Kontra-GaPi (3), UP Repertory Company (5), UP Singing Ambassadors (2) and UP Symphonic Band (10).

Twenty students were granted scholarship through the VACSSP while 14 were awarded the CTGACH. —Haidee C. Pineda, images by Leonardo A. Reyes