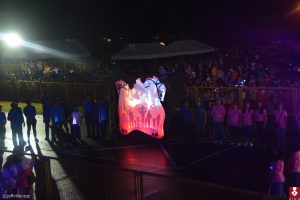 (DEC. 17)—The smell of wet grounds, trees, leaves and freshly cut grasses after the rain; the sound of laughter and chatter; the sight of selfie and groufie everywhere; singing and dancing, and Christmas songs playing nonstop echoed the festive mood of the UP Diliman (UPD) Lantern Parade this year.

Students, faculty, staff, residents and spectators assembled at the Oblation Plaza and Academic Oval as early as 4 p.m. on Dec. 14 to participate and witness the parade of gigantic colorful floats and lanterns. The parade officially started at 5:30 p.m.

The four biggest contingents were from the UP Integrated School (UPIS), CFA, College of Human Kinetics (CHK) and Office of the Vice Chancellor for Academic Affairs (OVCAA).

The number of participants per contingent were smaller compared to last year’s, perhaps because most classes already ended a week before the Lantern Parade while others went to the Maskipaps held at the Sunken Garden the same day. Nonetheless, the UPD Chief Security Office estimated almost 5,000 people joined the Lantern Parade. 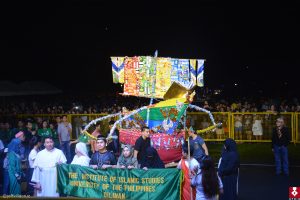 The creative lanterns depicted this year’s theme, “Paglaot, Pagdaong: UP Diliman Christmas Celebration 2018” as the university pays homage to its graduates, academics and personnel pursuing scholarly and advocacy works in the country. All lanterns were made from scraps and recycled materials.

UPD’s Christmas theme also celebrates the 70th anniversary of the Oblation’s transfer from the Manila campus to its new home in Diliman in 2019.

Among the lanterns were the pawikan (one from the College of Architecture (CA) and another from the Asian Institute of Tourism); College of Arts and Letters’ (CAL) paper boat in the sea of knowledge; Asian Center’s train lantern, Cesar E. A. Virata School of Business’ (VSB) version of the Spirit of Business sculpture and Bakunawa; CHK’s dragon boat lantern, the light house lanterns (School of Economics and College of Music/CMu); College of Home Economics’ balikbayan box, bangka lanterns (College of Engineering, Institute of Islamic Studies’/IIS, College of Social Sciences and Philosophy/CSSP and the College of Social Work and Community Development/CSWCD) and the School of Statistics’ (Stat) bangka and light house.

The College of Education with the UPIS and National Institute for Science and Mathematics Education Development created a giant paper boat lantern.

Other lanterns depicted political statements such as the lanterns of the College of Law and School of Library and Information Studies which symbolized the West Philippine sea; College of Mass Communication’s (CMC) tambuli; National College of Public Administration and Governance’s balangay; and the CSSP and CSWCD lanterns. 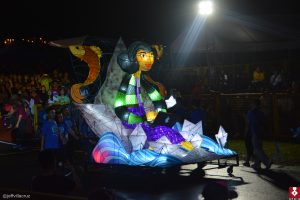 The UP ROTC Symphonic Band, Friends of Campus Animals members with their cute furry friends, Diliman Emergency Response Team, the UP Alumni Association officials and staff riding a tranvia, UPD Extension Program in Pampanga and UP Diliman Extension Program in Olongapo (UPDEPP and UPDEPO) with their giant colorful parol, and the Barangay UP Campus also participated.

A short program followed the parade.

UP President Danilo L. Concepcion, in his Christmas message, announced that UP employees will receive the P5,000 performance enhancement incentive from the Philippine government not earlier than Dec. 18.

In addition, he announced that UP employees will also receive an increase of P3,900 from the P4,500 grocery allowance before Christmas. The additional benefits were in accordance with the collective negotiation agreement (CNA) between the administration and the workers’ union.

During the program, the CompanY, dubbed as Asia’s premier vocal harmony act, staged a mini concert to usher in the announcement of winners.

The best lanterns were judged based on adherence to the theme (20%), creative use of materials (30%) and presentation and visual effects (50%).

In the competition among CFA classes, the Most Beautiful Lantern was awarded to the “Kasaysayan ng Kagitingan” pop up book. The second place went to “Lumad” while “Banig” and “Dragon” tied for third place.

Jessica Paula C. Dizon, UP Babaylan and UP SAMASKOM member, and Prof. Jose Antonio R. Clemente of the Department of Psychology hosted the program. —Haidee C. Pineda, images by Leonardo A. Reyes and Jefferson Villacruz 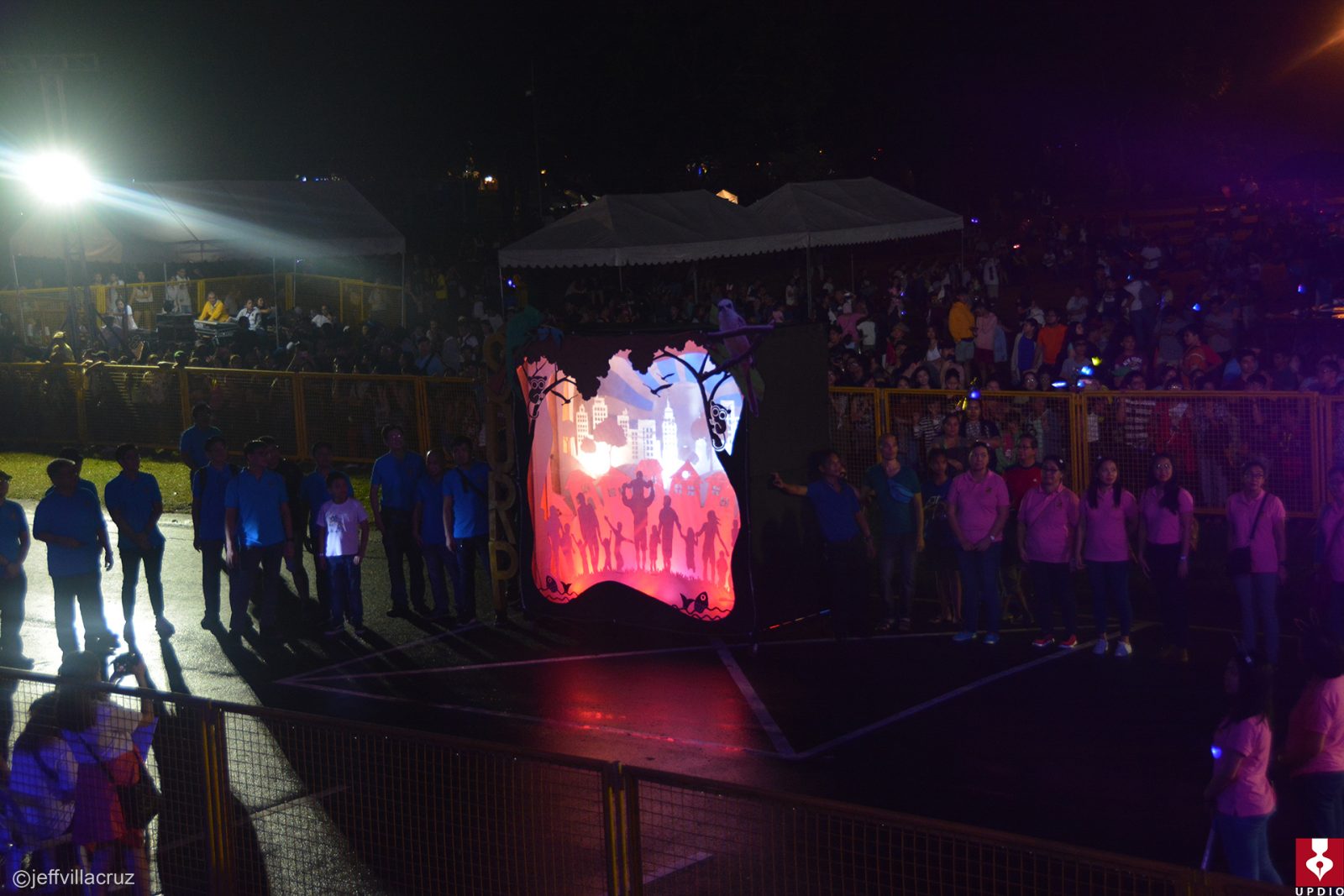 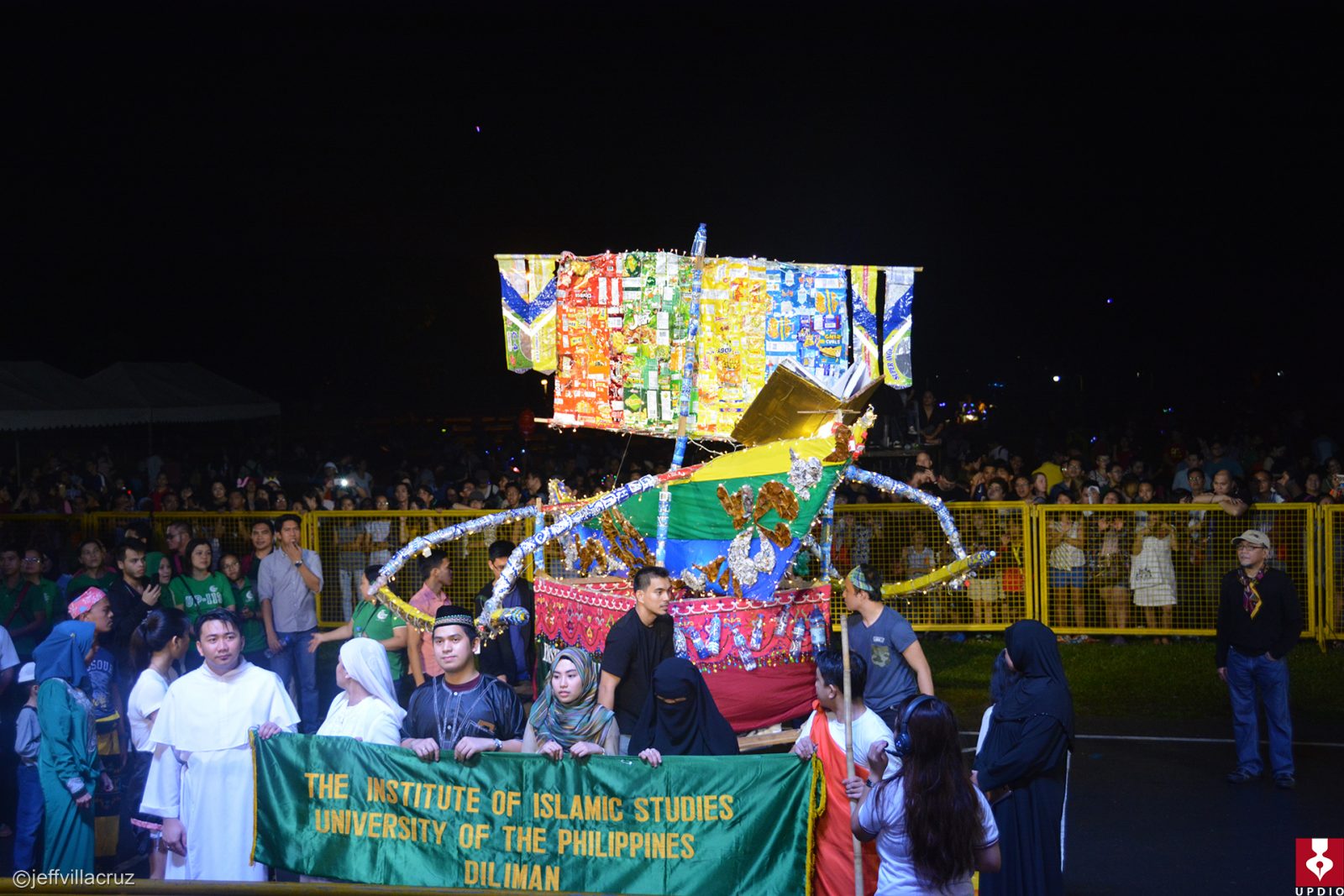 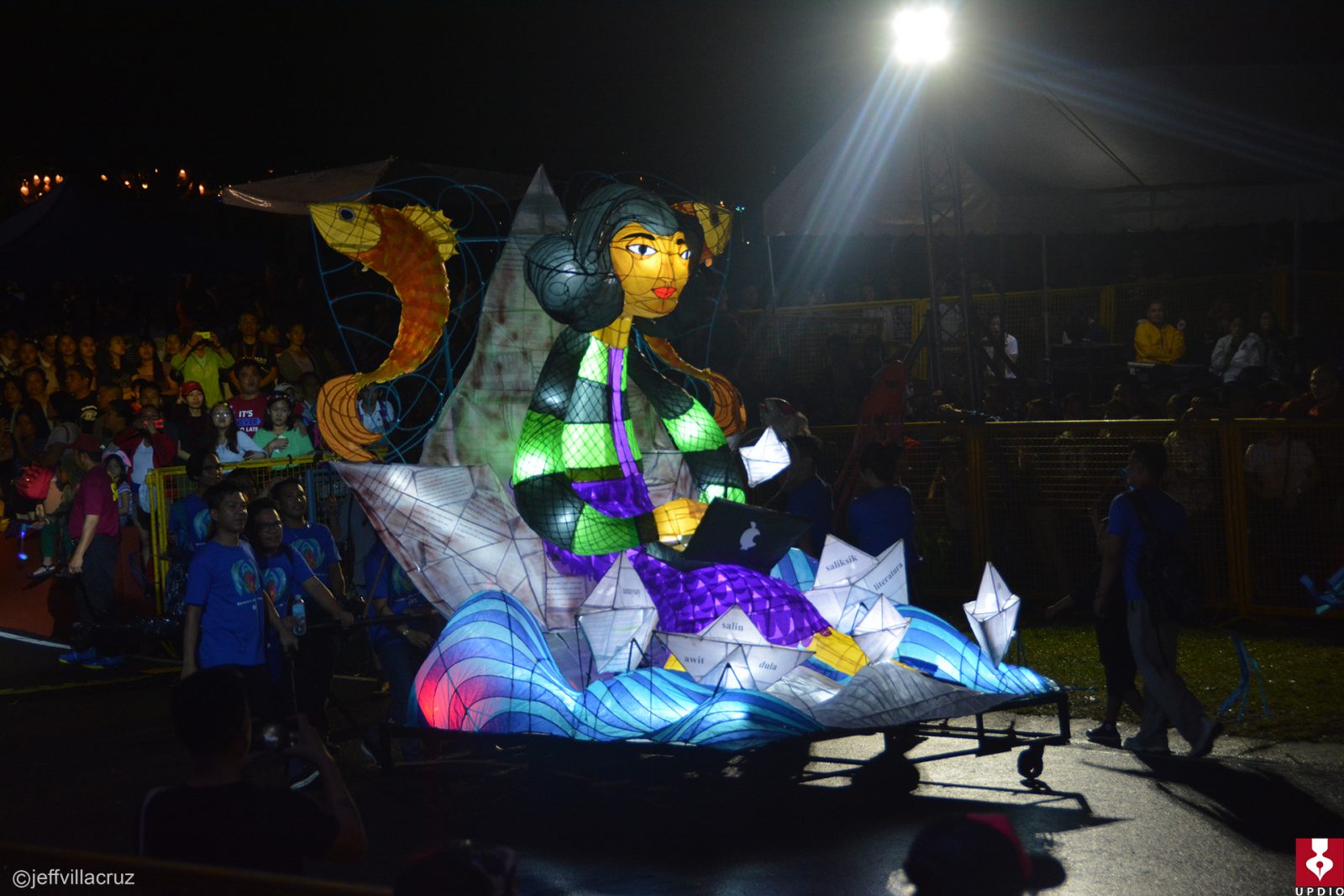 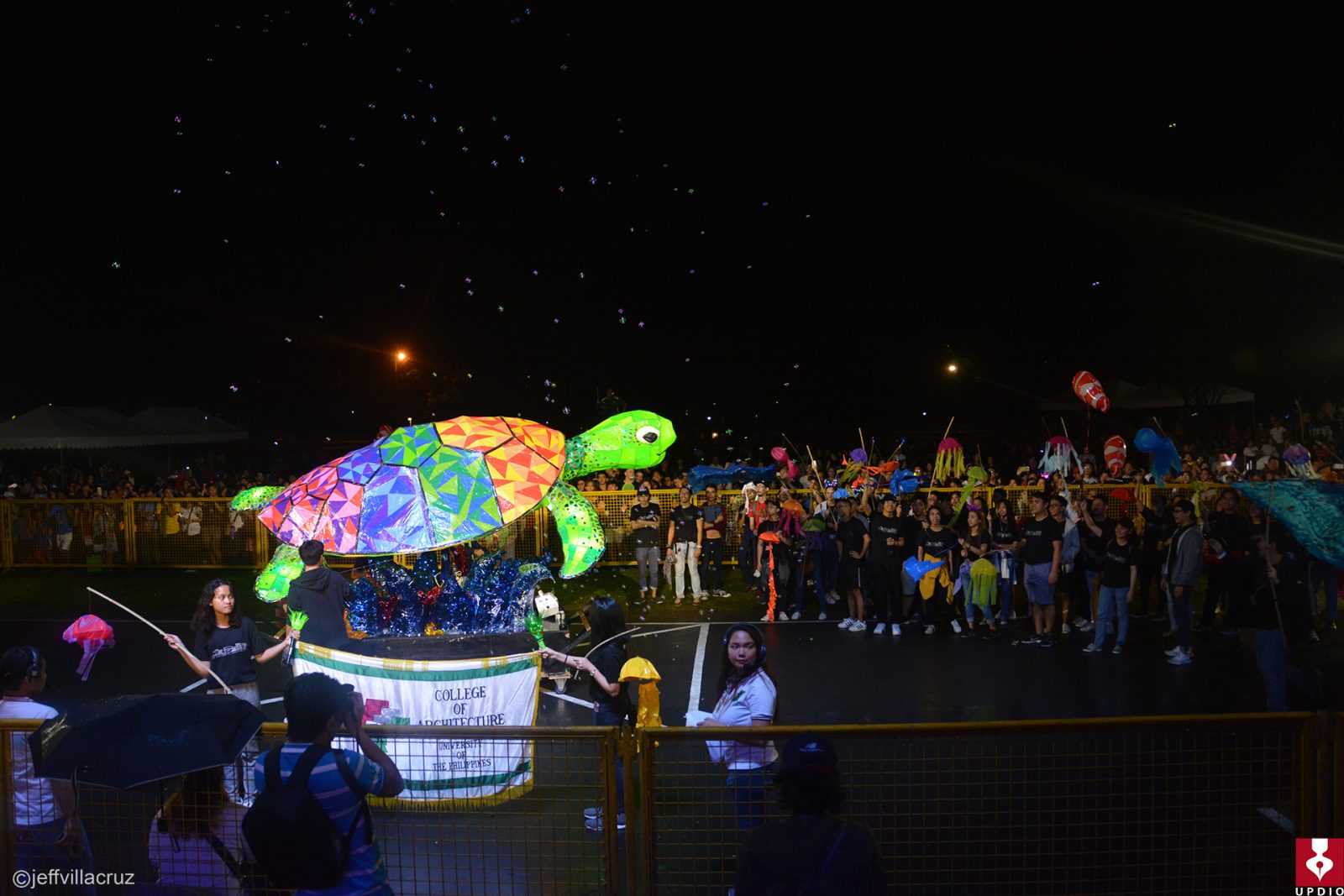 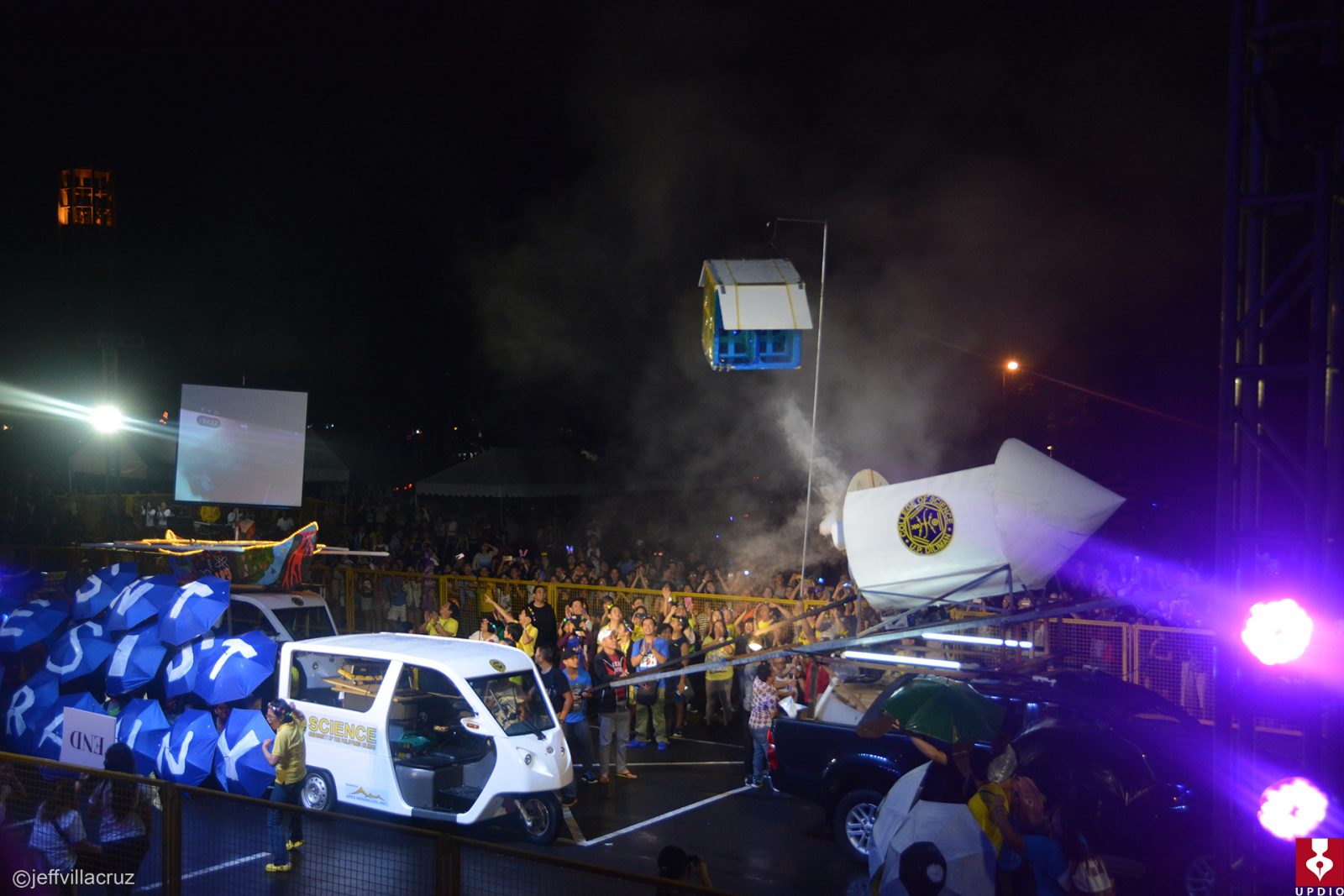 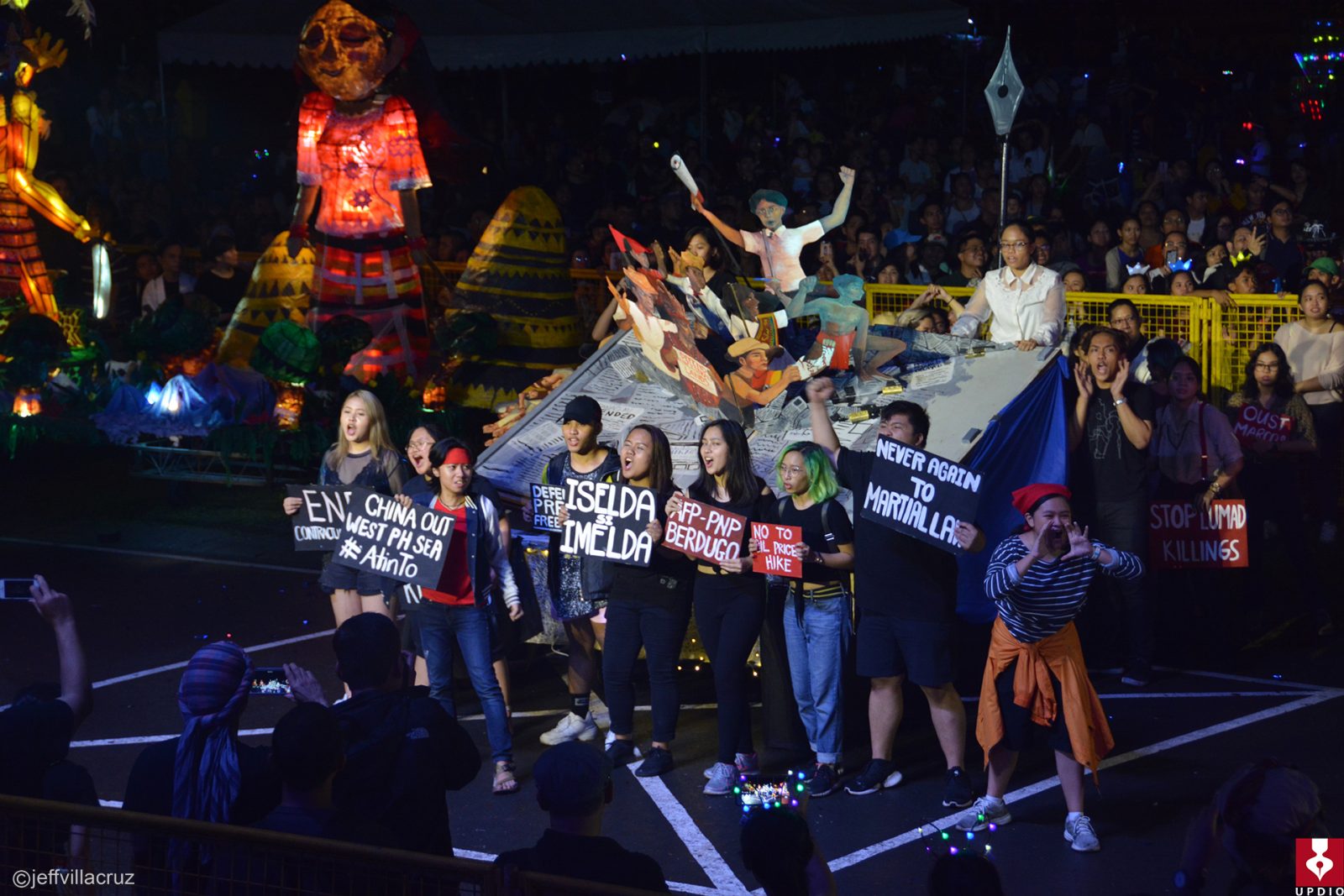 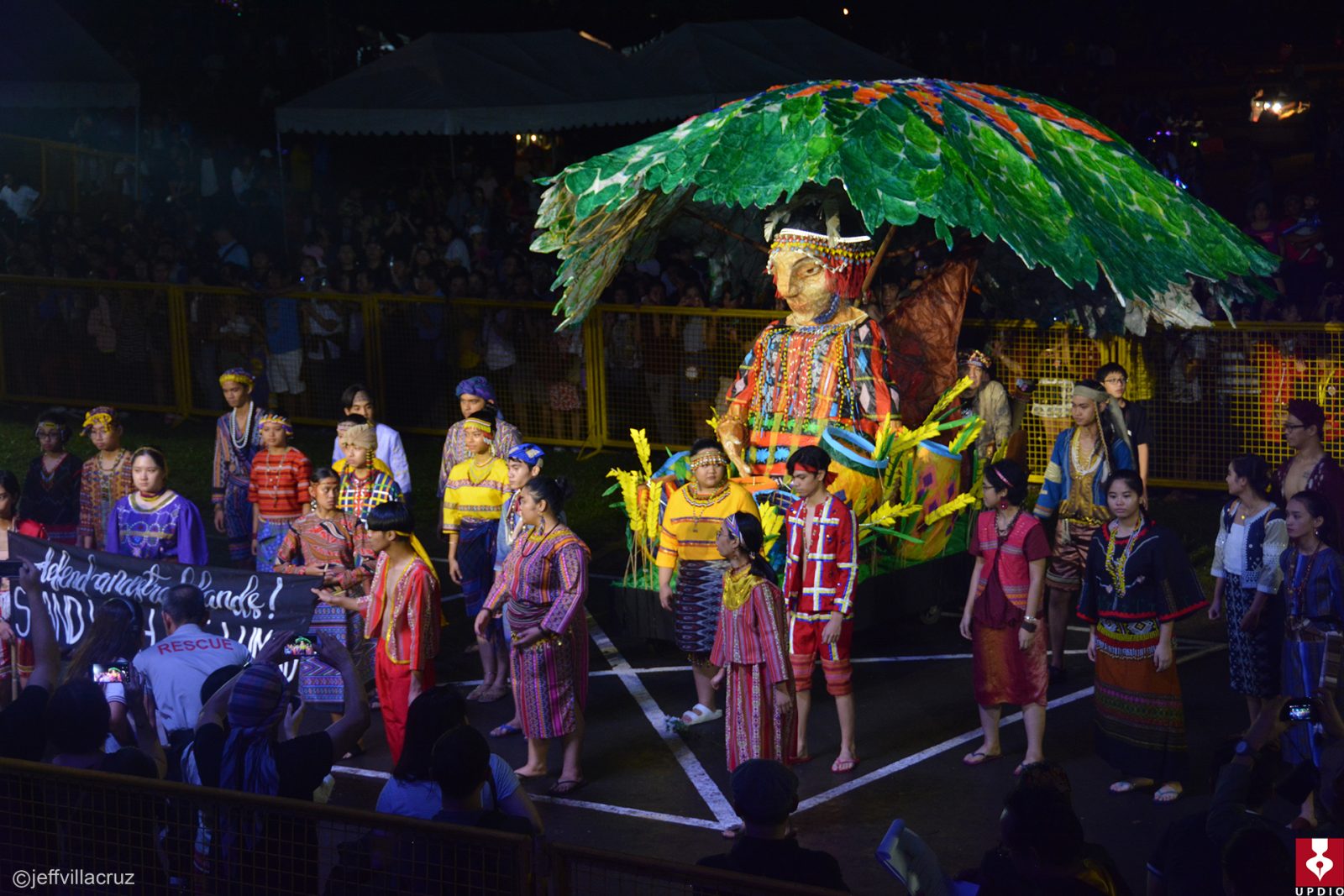 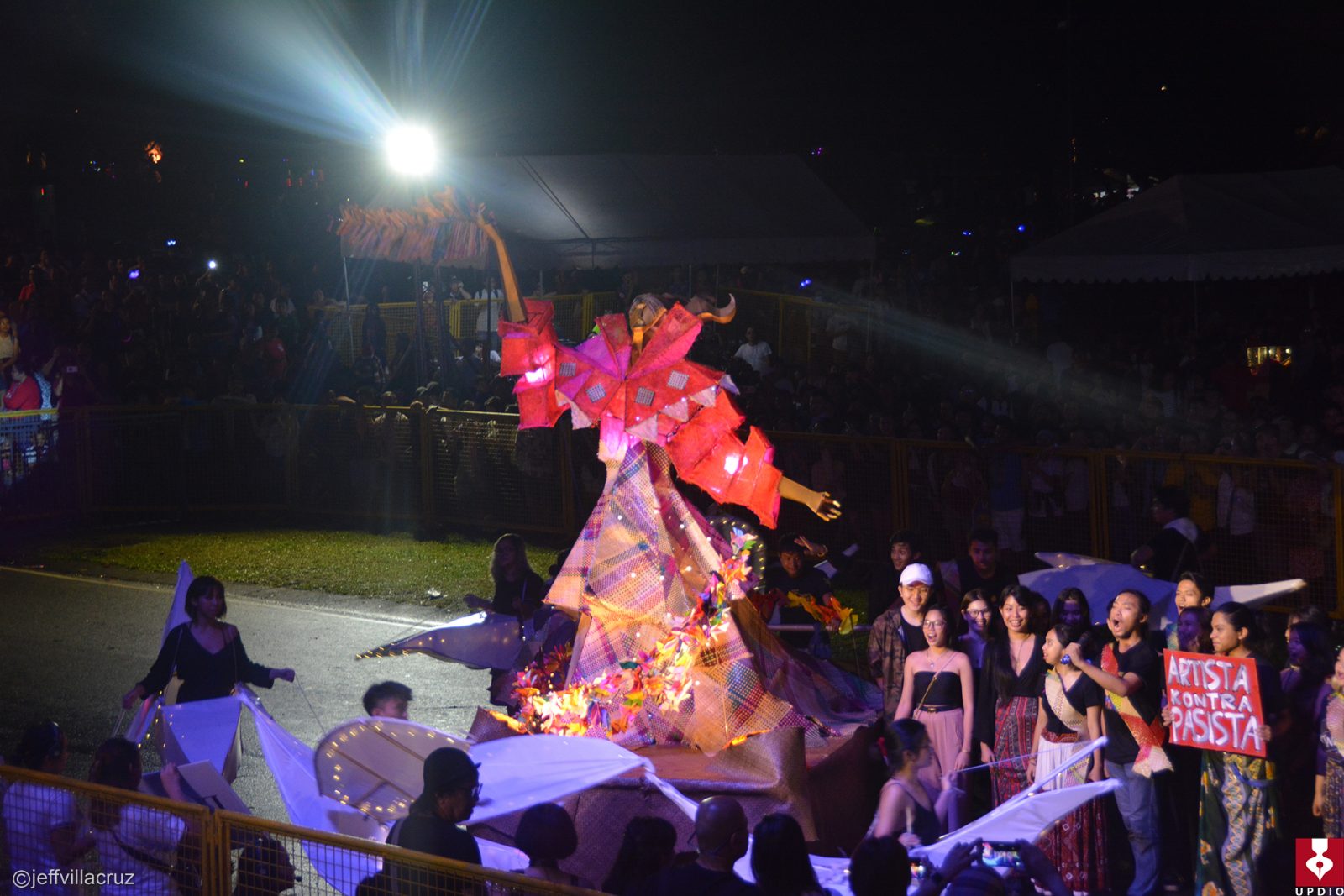 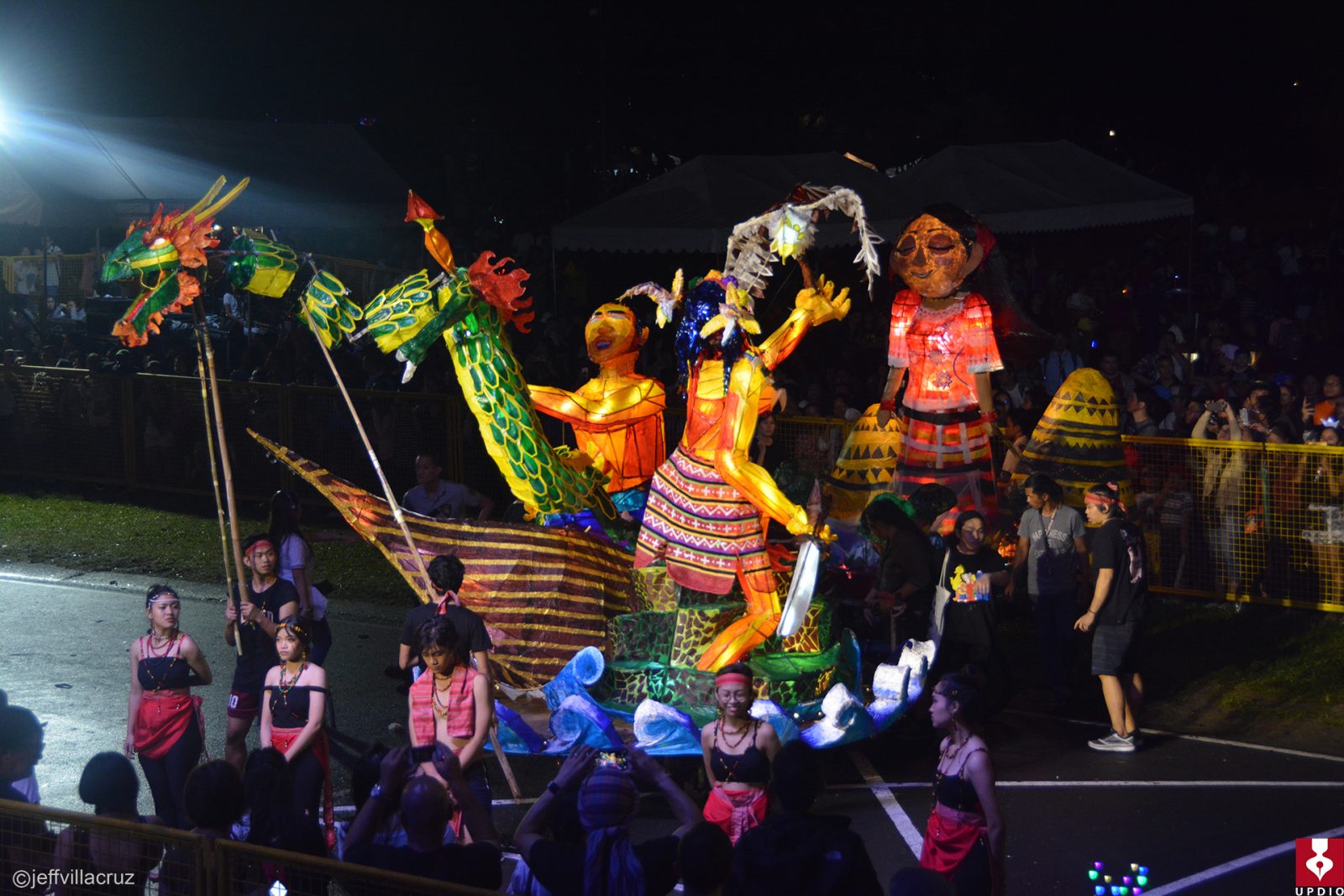 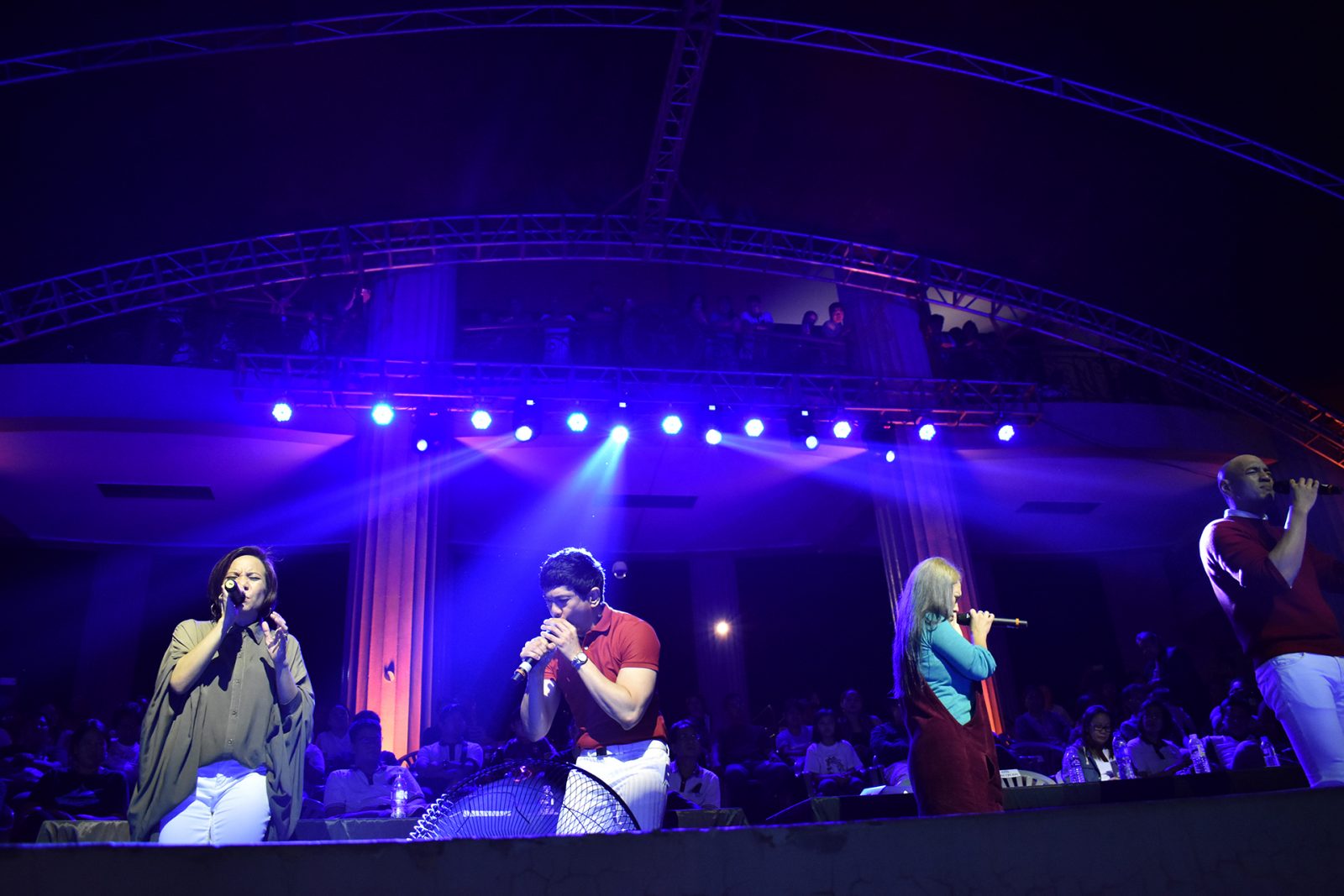