UPD has 70 UP Artists 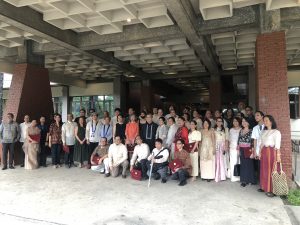 (DEC. 9)—Among the 70 UP Artists from UP Diliman (UPD) who were awarded last Nov. 29 at the Asian Institute of Tourism Auditorium, the College of Arts and Letters (CAL) had the most number with 25.

The UP Arts Productivity System (APS) was established by the Board of Regents in December 2008 as the counterpart for the arts of the UP Scientific Productivity System. It aims to encourage outstanding productivity in the creative arts or in arts scholarship for national development.

UP Diliman (UPD) had the most number of awardees with 70 out of the total 74 faculty members appointed.—Text by Anna Regidor, image by UP MPRO