(OCT. 24) – The UP Fighting Maroons survived the already ousted National University (NU) Bulldogs, 80-77, to rack up their 8th win in the UAAP Season 82 Men’s Basketball Tournament on Oct. 23 at the Smart Araneta Coliseum in Quezon City.

Despite being out of contention for the final 4, the Bulldogs still played to win, turning a 7-point half time deficit into a deadlocked affair at 56 apiece in the early goings of the 4th quarter.

NU’s Coach Jamike Jarin’s wards had an answer to almost every UP basket, however, breaks of the game just did not go their way in the end. When the Fighting Maroons seemed to have the game in the bag, 77-70, with just a little over 3 minutes remaining, King Bulldog Dave Ildefonso drained a 3 to make it just a two-possession ball game. UP missed on the ensuing possession, setting the table for a conversion from lefty point guard JV Gallego to bring his squad to within 2, 77-75. Jun Manzo was fouled on the other end, sinking both his charities, pushing the lead back to 4. Shaun Ildefonso and the Bulldogs get the ball back, drawing a quick foul from reigning MVP Bright Akhuetie, 11.5 ticks left on the game clock. Shaun calmly sinks both, but that would be it for his team as Manzo sealed the deal on the other end via a split on the line to net the final count. 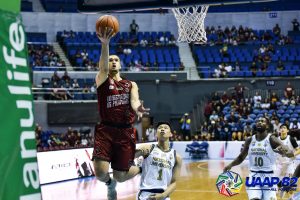 The younger Ildefonso, Dave, led all scorers with 24 to go with his 6 boards and 6 assists. Gallego was not far behind with 20 while teammates Migs Oczon and the more senior Ildefonso, Shaun, finished with 12 and 10, respectively.