UP repeats over UE 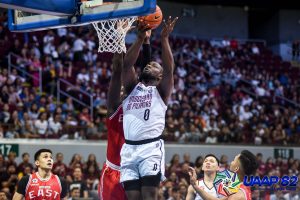 (OCT. 14)—The University of the Philippines (UP) Fighting Maroons swept their season series against the University of the East (UE) Red Warriors by edging them, 78-75, in the second round of the 82nd Season of the UAAP Men’s Basketball Tournament, at the Mall of Asia (MOA) Arena in Pasay City on Oct. 12.

Still feeling the sting from their losses to the Ateneo Blue Eagles and Far Eastern University Tamaraws in their previous two outings, the Fighting Maroons immediately vented their ire on their Recto-based counterparts as they stormed to a 27-10 advantage in the opening period. 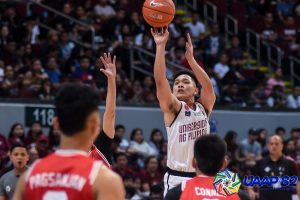 But the Red Warriors responded in the next quarter, using a 20-2 run inside the final five minutes of the first half to tie the game at 41 apiece at the 1:41 mark of the second quarter. Cebuano floor general Jun Manzo, however, scored and assisted on UP’s next two possessions to give them a 5-point cushion going into intermission.

UP’s offense started to hum once again in the 3rd period, as they scored 19 points, but it was their defense that took centerstage in this quarter as they limited UE to just nine points. UP built a 15-point advantage entering the final canto. 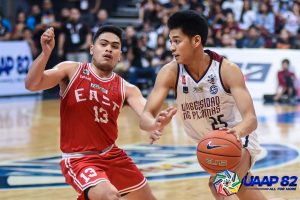 In the early goings of the final period, Red Warriors’ 1-2 punch in Rey Suerte and big man Alex Diakhite, led the Recto-squad on a 17-4 blitz to trim the gap to just two points, 69-67, with 3:52 left in the ball game. This would be the closest UE could get. Kobe Paras scored on a trifecta in the ensuing possession to restore order to the game as the Fighting Maroons never looked back.

Reigning most valuable player Bright Akhuetie led the charge for UP, amassing a double-double performance, 18 points and 14 rebounds. Four other players scored in double digits for the Fighting Maroons, Manzo tallied 17, Paras contributed 14, while Javi Gomez De Llano and Ricci Rivero had 10 each. This was Rivero’s first game to score double digits this season. 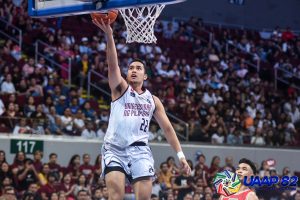 Diakhite finished with 28 markers and 20 rebounds for UE. The burly lefty played all but a minute in this ball game. Suerte, after being held to just four points in their first round matchup, wound up with 17 points.

With the win, The Fighting Maroons solidified their hold of 2nd place with a 6-3 card while UE stayed at 7th place, touting a 3-7 record.

UP will face the University of Santo Tomas Growling Tigers on Wednesday, Oct. 16, 4 p.m. at the MOA Arena. — Javi Palaña, images from UAAP Season 82 photo release.