(MAY 30)–Seventy-one faculty members were named UP Scientists of various ranks under the Scientific Productivity System (SPS) in ceremonies at the School of Statistics Auditorium on May 28.

Awarded the distinction of Scientist III were Dr. Windell L. Rivera and the late Dr. Perry S. Ong from the Institute of Biology (IB); Dr. Gisela P. Concepcion from The Marine Science Institute (The MSI); Dr. Carla B. Dimalanta and Dr. Alfredo Mahar Francisco Lagmay from the National Institute of Geological Sciences (NIGS); and Dr. Percival Almoro and Dr. Caesar A. Saloma of National Institute of Physics (NIP). 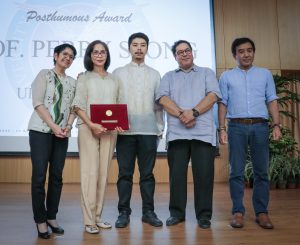 The SPS was created by virtue of its approval by the UP Board of Regents at its 1199th meeting on Aug. 26, 2005.  SPS supports the development of science and technology and encourages and rewards scientific productivity.

The UP Scientist appointment carries monetary rewards of P150,000, P200,000 and P250,000 annually, for Scientist I, II and III respectively. — Bino Gamba, images by Misael Bacani, UP MPRO