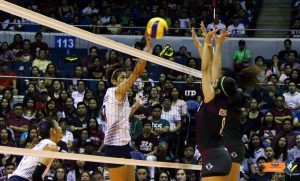 With service aces and power attacks, UP easily took the first set. The Lady Maroons appeared to cruise for another easy conquest when they were leading 23-19 in the second set, but NU fought back to steal the second set.

In the third set, UP again led by as much as 9 points, 20-11, when NU made a huge comeback to even the score, 20-20. The Lady Maroons, however, held their ground by responding with good floor and net defense.  Sophomore Isabel Molde sealed the third frame by blocking Audrey Paran.

It was all UP in the fourth set as they dominated and overpowered NU to win the game.

Five UP players scored in double figures. Kathy Bersola, who was named Best Player of the game, had 14 points, eight coming from kill blocks. Molde and Diana Carlos also contributed 14 points each, while Aiesha Gannaban and Marian Buitre scored 13 and 12 points, respectively.

With the win, the Lady Maroons kept their Final Four hopes alive and avenged their 5-set loss against NU in the first round.

UP’s next assignment is against the University of Santo Tomas on April 2, 4 p.m. at the Mall of Asia Arena.