UP Diliman Month 2019 remembers the exodus 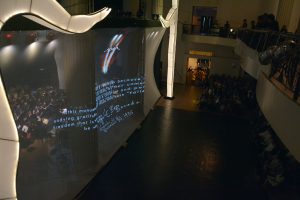 (FEB. 12)⎯Quezon Hall lobby was transformed into a time machine as the University commemorated the 70th year of the transfer from war-torn UP Manila to the Diliman campus during the opening ceremony and launch of UP Diliman Month 2019 on Feb. 11.

Through a mix of movement, music and poetry, the program traced the Oblation’s significance in the life of the students, faculty and other UP Community members in a program entitled “Pagalaala, Paglulunsad.”

The middle columns of the Quezon Hall lobby served as the stage, with a white sheet of fabric stretched out between them, serving as both curtain and screen onto which images could be projected. The orchestra and chorus was situated behind the fabric. 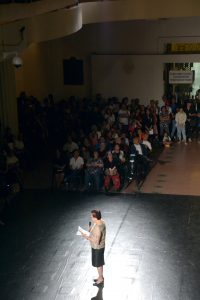 Each part began with a poem or spoken-word piece followed by a musical and/or choreographic performance, while in the background an audio-visual presentation about the segment was being projected onto the screen.

For Exodus, the UP Filipiniana Dance Group, the UP Dance Company and the UP Varsity Pep Squad performed a choreographic piece that re-enacted the transfer of the UP Oblation on Feb. 11, 1949.

Home began with a short essay by former College of Arts and Letters Dean Flora Mirano about her experiences as a member of the pioneering families that moved from Manila to Diliman. It was followed by a short dancesport performance while images and music representing UPD’s development from 1949 to 1970 were projected on screen.

Activism centered around UPD’s tradition of activism, featuring performances by the UP Repertory Company while New Directions focused on issues and innovations currently concerning UPD.

For the grand finale, the UP Symphonic Band, the UP Concert Chorus, the UP Cherubim and Seraphim, the UP Chorus Classes and the UP Manila Chorale performed an original composition made especially for the occasion by National Artist for Music Ramon P. Santos entitled “UP Pamantasang Hirang.” 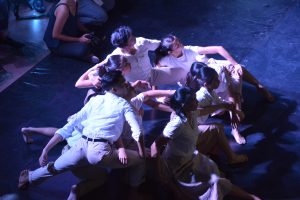 The event was capped off by a grand fireworks display usually seen during the annual Lantern Parade.

“Pagalaala, Paglulnsad” is the first of many events lined up for “Lakad-Gunita sa Lupang Hinirang: UP Diliman Arts and Culture Month 2019.”

Next is Lupang Hinirang: Mga Kuwento ng Pagsasalugar ng UP Diliman, an exhibit that will run from Feb. 15 to Mar. 29, 10 a.m. to 4:30 p.m. at the Bulwagan ng Dangal University Heritage Museum. The last day of the exhibit will coincide with a forum on “Memories and History of UP Manila and UP Diliman” featuring research works that complement the exhibit. 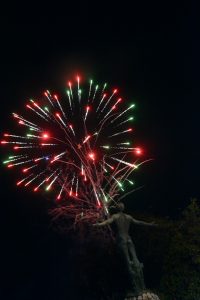 On Feb. 22, 8 a.m. to 4 p.m. at the NISMED Auditorium is “Pagpunla at pag-ani: A national conference to commemorate the 70 years of UP Diliman,” a one-day conference gathering some of the renowned academics of UPD to reminisce and reflect on their education and experience in UPD.

On Feb. 24, 6 p.m. the UP Theater Canopy will be staging Himigsikan—an annual free open-air concert that takes place during Diliman Month—featuring the band Freestyle.

Throughout the month the Office for Initiatives in Culture and the Arts and the Asian Institute of Tourism are co-organizing Lakad-Gunita, a series of on-campus walking tours held from Mondays to Fridays, with each day of the week carrying a theme: Diliman Fauna Tour on #HuniMondays, Diliman Commune Revisited Tour on #MulatTuesdays, Public Arts and Architecture Tour on #HangaWednesdays, Diliman Flora Tour on #GubatThursdays, and the Historical Buildings Tour on #LingonFridays.

Lakad Gunita is free of charge. Interested parties may sign up here. You may also email them at asianinstituteoftourism.upd@up.edu.ph.—Anna Regidor, images by Leonardo Reyes