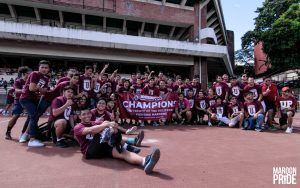 After the first semester events of the University Athletic Association of the Philippines (UAAP) Season 81, the UP Fighting Maroons is at second place in the general championship with 188 points. The University of Santo Tomas (UST) Growling Tigers leads the race with 212 points.