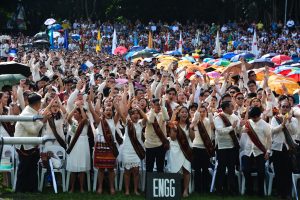 (JUL. 1) —Wet grounds, rain-soaked-but-still-radiant-as-ever sunflowers and moist grasses and soil welcomed some 5,000 graduates who were conferred their respective degrees, together with their parents, guardians, guests, faculty and staff, at UP Diliman’s (UPD) 108th General Commencement Exercises at the University Amphitheater on Jun. 30.

At 5 a.m., it was still drizzling. The graduates came wearing their sablay and prescribed dress code, but instead of wearing high heels and leather shoes, most were wearing comfortable and practical shoes. They also brought raincoats, ponchos and umbrellas as they were warned the day before the graduation about the chances of rain in the morning.

Although it was cloudy, the drizzle stopped as soon as the ceremony officially started at 7 a.m.  and a glimpse of sunshine blessed the graduates with good weather throughout the event. 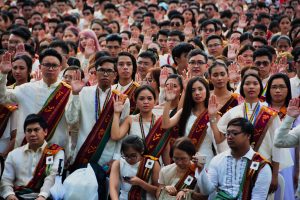 Leading the top honors was Jaron Nicolas T. Uy, Bachelor of Science in Chemical Engineering (BS ChE) of the College of Engineering (COE), with a WAG of 1.019. On second spot was BS in Electronics and Communications Engineering (BS ECE) major, Reine Jiana M. Reynoso, 1.027. 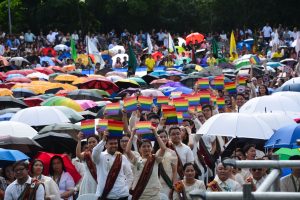 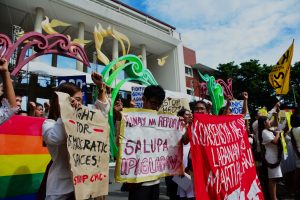 Strength amid adversities. UPD Chancellor Michael L. Tan, in his welcome remarks said “The sunflowers bloomed somewhat early and held out even when battered by rains to make it today. We made it as well, a symbolism of strength amid adversity could not have been more appropriate, your batch graduating as we mark the 70th anniversary of UPD.” 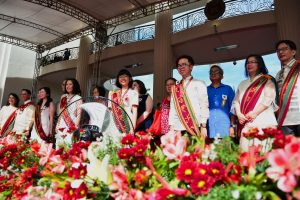 He also said, “Can we help it, too, that UP has become more enabling, so visible in the current frenzy of building? Andaming mga bagong gusali saka renovations…Together with the buildings, we continue to expand many services and to introduce new ones for the mind, the body and the spirit to bring out the full potential of our iskos and iskas.”

Moreover, Tan said “What strikes me about our summa cum laudes is that so many of them were able to combine academics with serving in student councils, student organizations, serving others… That too is the spirit of UP. eyond the Latin honors, we celebrate the dare-to-dream, dare to win attitude of our students, so dramatically epitomized by the now famous slogan, “Atin Ito” – victory will be our’s —coined by Paul Desidero, captain of the men’s basketball team that catapulted UP into 2nd place in the 2018-2019 UAAP basketball tournament, our entry into the Final 4 breaking a 22-year old drought.” (See full text of Chancellor Tan’s remarks here.) 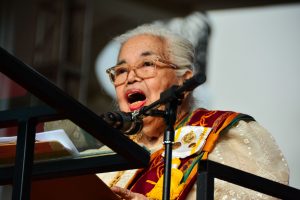 Commencement speaker.  National Artist for Theater Amelia Lapeña-Bonifacio is the Commencement Speaker.  Lapeña-Bonifacio, a University Professor Emeritus at CAL’s Department of English and Comparative Literature, is known as “The Grand Dame of Southeast Asian Children’s Theater.” As a playwright, among her works are 10 books, 16 plays, 30 plays for children and more than 120 short stories for children published by the “Philippine Journal of Education.” She has also produced a number of poems, short stories and essays.

Pag-ibig, pagtahan, paglaya. Speaking on behalf of the graduating class was Ramos, who talked about the concept of home. 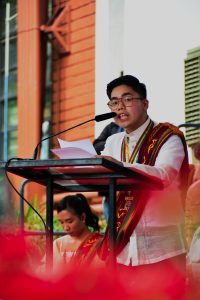 As a tradition in every UP graduation, towards the program’s end, student activists raised their fists and banners and protested against the commercialization of education, Socialized Tuition System, China-Duterte dictatorship, extra judicial killings and other political and social issues. They also unfurled a banner at the stage with a statement, “Atin ang Pilipinas!” in light of the issues on the West Philippine Sea.

At the end of the program, the graduates and their families and friends took groufies and selfies with the canopy on the stage as backdrop while some went to the University Avenue to have their photos taken with the sunflowers as background. The stage, designed by sculptor Toym Imao, depicted the graduation theme “Tahanan.” —Haidee C. Pineda, images by Leonardo A. Reyes and Jacelle Isha Bonus