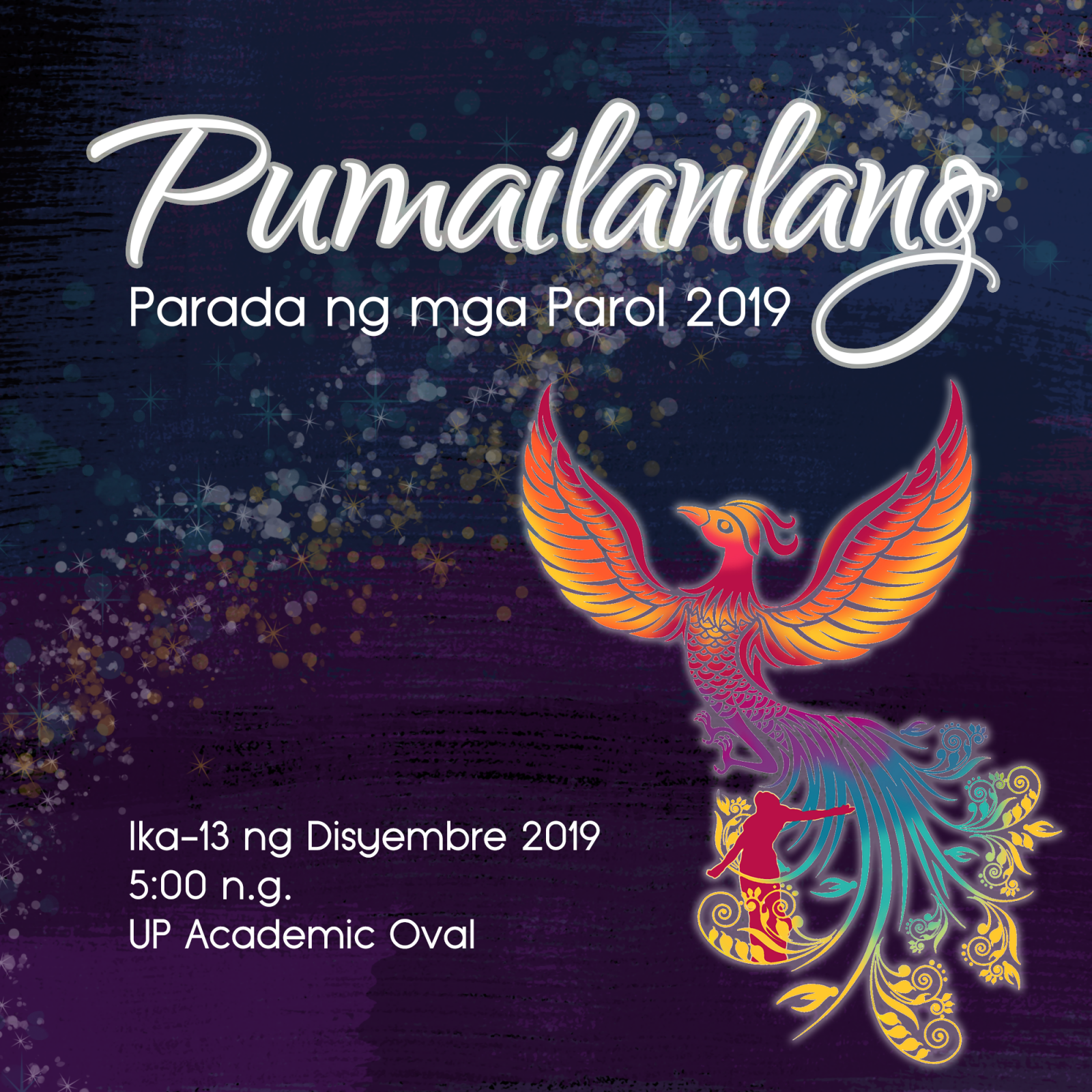 This year, the Parade will be held on Friday, Dec. 13 starting at 5 p.m. around the Academic Oval, culminating at the University Amphitheater. It carries the theme “Pumailanlang,” meaning to soar, where like the mythical Ibong Adarna, one can surpass the suffering and difficulties faced by the country.

Like the previous parades, the competition will have two sets of winners: the first from among the entries of participating colleges and offices, excluding the College of Fine Arts (CFA), and the second from entries of the CFA classes.

At stake for both sets of winners are three major prizes and two runners up, with cash incentives of up to P50,000.  Entries will be judged according to compliance with the theme, materials used, presentation and visual effects and eco-friendliness.

This year’s judges are all UPD professors namely: Nicolo del Castillo, PhD, of the College of Architecture; Elena Mirano, PhD,  Professor Emeritus of Art Studies at the College of Arts and Letters; and Nilo J. Parilla, Mary Catherine Sta. Ana and Lisa Tapang—all from CFA.

Origins. From its beginnings as a simple homage to an old Christmas tradition to the elegant, colorful, sometimes controversial creations that strut (or sometimes sputter) around the UPD academic oval each Yuletide, the Lantern Parade has evolved into an event that reflects both the people and milieu of its time, depicting the changing social and political landscape of the University and indeed, the country.

The Lantern Parade began in 1922, inspired by the folk practice of carrying lanterns of various shapes and sizes to light the way to the early morning December masses or misa de gallo during the Spanish period. It was institutionalized in 1934 by UP President Jorge C. BOcobo “so that students can have a frolicsome activity before the year ends.” In its earliest years, when UP was still in the city of Manila, the parade started from the University Quadrangle on Padre Faura Street and made its way through Taft Avenue, Isaac Peral and Florida Streets, culminating in front of the engineering building where the Court of Appeals now stands.

The Second World War and the Japanese Occupation of the Philippines in 1941 interrupted the celebrations. In 1949, UP transferred to the then largely remote area of Diliman. The transfer offered a fresh start for its constituents who were eager to celebrate after the war. The parade participants would assemble near Little Quiapo (now occupied by the Parish of the Holy Sacrifice) where the parade started,  going south to the Administration building towards the Liberal Arts building, passing the Education and Law buildings and ended in front of the Engineering building, where the program was held. Then, fledgling student organizations and fraternities were eager to showcase their camaraderie and solidarity through colorful and customized lanterns. This was also when many parade traditions such as the awarding of prizes for the best lantern were introduced.

By the 1960s, the parade had expanded to become a venue of pageantry with traditions such as the annual crowning of the Lantern Queen, perhaps the most recognizable of whom was veteran actress Boots Anson Roa. It also became a venue for protest when in 1969, just before the declaration of Martial Law, the Lantern Parade took on an activist motif. It was also the last time the UP Student Council (USC) would helm the event. Fittingly enough, beauty queen and humanitarian Nelia Sancho was crowned Lantern Queen.

In 1970, the Lantern Parade went on hiatus until 1976; its comeback in 1977 was made spectacular and remarkable with participants carrying torches while parading around the Academic Oval, unmoved by the ominous atmosphere of Martial Law.  Several changes in format were executed upon its revival. Instead of the USC as sponsor, a committee appointed by the UP president managed it. The selection of a Lantern Queen was also discontinued, as some sectors protested the “beauty contest” part of the event.

With the celebration of the Philippine Centennial in 1998, the UP System administration transported the UPD parade to Luneta Park in Manila and expanded participation to its other constituent universities all over the Philippines.

The period between 1998 and 2008, which saw a virtual transition from the analog to the digital age as well as the dawn of a new century, was marked by change and experimentation. One such case was in 2002 when the Lantern Queen selection was revived with a twist — a Lantern King was also chosen, both from among the participants and the crowd, all in the spirit of fun.

University-recognized student organizations had also diversified greatly to include members of groups such as UP Babaylan and UP Tomo-Kai.

This period was also not without conflict. In 2006, the parade was cancelled due to “security threats” reportedly brought by the impending tuition fee increase. A number of colleges and student organizations, among them the College of Fine Arts (CFA) and the UP Babaylan, nonetheless paraded around the Academic Oval, to the delight of the audiences who had come to the campus for the much-anticipated tradition.

Ten years after the Luneta Lantern Parade, the University celebrated another, more personal milestone with the coming of its own centennial, capped by one of the most elaborate and magnificent lantern parades in recent memory. The scale of the 2008 event was virtually unseen, as all seven constituent universities again had representative contingents at the Diliman parade. Covered by practically every major news network in Manila and attended by thousands of people, the highlight was the hour-long presentation by Hall-of-Famer CFA, who left the crowd speechless with a circus theme that lasted well past midnight. It was capped by an equally lengthy fireworks display.

Modernization, globalization and environmental concerns significantly changed the way the participants created their lanterns and floats, depicting the changing education environment in the new millennium, i.e., the ubiquity of computers and information technology in all aspects of life. Spectators were in great awe of the Internet-inspired smiley emoticon lanterns of the UP Open University, the Erlenmeyer Flask lantern of the College of Science and the larger-than-life robotic lantern of the College of Engineering.  Despite these changes, the parade still served as a platform for protest and ventilating national concerns such as education budget cuts and grievances against the national government without compromising its main objective to seek peace, hope and harmony.

From 2005 to February 2011, the UPD Administration streamlined the Lantern Parade. Performances in front of Palma Hall and Melchor Hall were discontinued; instead these were now staged exclusively in front of the University Amphitheater behind Quezon Hall. Lantern size was also regulated to not more than 10×10 feet. Finally, only three main prizes were given to the most creative lanterns made out of recycled materials. Judging was based on the following criteria: originality, imagination and appropriateness to the parade’s theme.

Music and performances for a cause