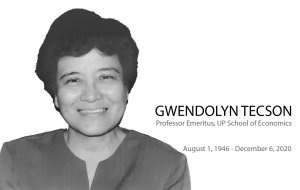 (DEC. 9)—Gwendolyn R. Tecson, Professor Emeritus of the UP School of Economics (SE) passed away on Dec. 6. She was 74 years old.

A lifelong academic, she joined SE as instructor in 1971 and served the School in various administrative capacities, including director for public affairs, chair of the undergraduate committee, and later department chair. She retired as full professor in 2011 and was subsequently appointed as professor emeritus.

Her students remember Tecson for her lucid teaching and her empathy for students, though these never diluted her insistence on excellence and academic integrity.

Tecson was an early product of the SE master’s program. Tecson took her undergraduate degree from Saint Theresa’s College, which honored her with its Teresa’s Light Award for Education in 2019. After her M.A. from U.P. she completed her PhD at Hitotsubashi University under the renowned Ippei Yamazawa, becoming the first Filipino to complete an economics doctorate from Japan. She was fluent in Japanese and French.

Tecson’s main line of research was international trade and industrial economics. She was an important member of the group that published two highly influential works that at the time were the most extensive and authoritative studies of the country’s system of industrial incentives. The first [Bautista, Power, Tecson, et al. 1979] covered the 1970s and showed how the structure of protection in the 1970s had not significantly changed since the 1960s. The second [Medalla, Tecson, et al.2 vols. 1995] documented improvements following the liberalization of the 1980s and, at the same time, warned of their partial reversal. Apart from trade, Tecson studied the development role of small and medium scale industries and was interested in the peculiar trends of Japanese foreign direct investment in the Philippines.

Tecson was a meticulous and thorough researcher with an eye for detail. She was one of the few practitioners doing industry- and firm-level studies to regularly include interviews of firm-owners and practitioners aside from simply relying on statistics and desk research. She conducted research focused particularly on the automotive and electronics industries. Together with a Japanese sociologist professor and friend, she made many trips to Sta. Rosa, Laguna, for exam-ple, to interview workers in car assembly plants.

She never wore her faith on her sleeve but lived it fully. She was a devoted member of Notre Dame de Vie, a Catholic secular institute, originally founded in France, whose main formation center in the Philippines is at Encanto, Angat in Bulacan. It was there that she spent her last few years.

She will be deeply missed by colleagues, friends, and students alike.