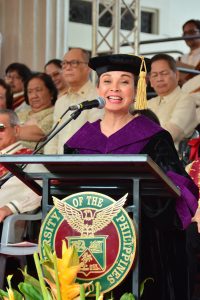 Thank you, first of all, for this tremendous honor you have bestowed upon me, which I accept in all humility. In 1981, as I stood on the stage of the UP Institute of Mass Communication addressing the graduating class, I would never have imagined standing at this podium as your commencement speaker and honoree.

As I entered UP today, these memories came swarming back to me. And looking at Quezon Hall and seeing our beautiful and magnificent Oblation, I realized that despite the passage of nearly forty years, some things about UP never change.

And I don’t mean just the Ikot jeepneys or the Carillon or the Sunken Garden or the bluebooks.

I know that Diliman now must have twice as many buildings as there were in my time, if not twice as many students. And where we all had to carry heavy books and stacks of note cards, most of you got by through college using just mobile phones and iPads. Where we had to camp out all night to get in line for our class cards, you register online, and get your grades online.

Things change, and things move forward—as they should.

Indeed, I return to Diliman today much less as Senator Legarda than as Student Loren, someone who has never really stopped studying, because UP taught her that real learning never ends. I have no PhD, although I’m quite proud of my Master’s in National Security Administration from the National Defense College in 1993, and for my promotion to the rank of Full Colonel, after finishing the Command and General Staff Course of the Armed Forces of the Philippines Command and General Staff College. But in the end, I submit that one can be a lifelong scholar in attitude and in practice.

And anyone who aspires to a life in public service has to be willing to learn—and to work hard, because much of our learning comes from work.

My path to that life was never straight nor easy.

You might say that my public life began when I worked as a commercial model at 15, promoting products that your mothers would remember.

This was followed by two decades in broadcast journalism, where I dealt with the issues of the day and of the hour. This was, in a way, my real education in politics and public affairs. And when I entered politics, my first job was to study and prepare for the responsibilities of legislation, as well as to learn and master the art of survival in a male-dominated chamber.

If there is anything I would like you to know about me—and I say this at the risk of a little immodesty—it is that I have been a diligent student all my life. My parents and relatives know this, and some of my friends hated me for this, but I was, you might say, a nerd—someone who did all her schoolwork before playing, who stopped chatting on the phone when it was time to study, who preferred the library to the cafeteria, who never cut classes to watch a movie.

But beyond book learning or getting high grades, studying for me has always been an attitude—a way of looking for answers and solutions, of getting things done at the end of one’s inquiry. I have never stopped asking why, and why not.

This was, I’m sure, partly the influence of my grandfather, the highly respected editor of the pre-Martial Law Manila Times, Jose Bautista, from whom I got my tenacity and my no-nonsense bullheadedness when I’m seeking out the truth.

From my late mother Bessie and her circle of artist-friends who included Mang “Enteng” Manansala and H. R. Ocampo, I acquired a passion for culture and the arts. It was no surprise why I chose to write about Manansala’s art during the first decade of martial law for my undergraduate thesis. I wanted to see and to show how art and artists responded to the temper of the times.

And I must say that I have never lost that spirit of inquiry, that insatiable curiosity, about the world and how it works. And when the world fails to work, or begins to fall apart, as we are seeing with our environment, I become even more intensely engaged. I insist on knowing why we let this happen, and on knowing what we can do about it.

It has been my greatest privilege—apart from becoming a mother to two wonderful sons—to have been able to do something about the causes that move me: the environment and climate, women and children, culture, and education.

And what has made that possible has been my work in the public sphere, which I invite and challenge you—our graduates, the brightest of our Filipino youth—to enter and engage in.

I am often introduced as a three-term senator who has devoted her tenure to the improvement of our people’s well-being.

But even as that senator, few people seem to truly understand me, because the causes I espouse are not the ones which make the headlines. I do not seek out political controversy, or engage in sometimes tiring and endless debates, whether on the floor of the Senate or on social media.

The concerns I raise and the causes I espouse go beyond governments and administrations. They do not have six-year life spans.

But they must engage every government and every administration, no matter who the personalities involved may be. They must be on every credible political party’s platform and agenda—whether they stand on the right, center, or left.

I speak, primarily, of the need to protect and to promote our environment—the physical world we live in, which also provides a home to our souls and to our culture. We have managed to destroy, within half a century, what took the earth tens of thousands of years if not longer to create—our forests, our coral reefs, our diverse species. We have disturbed our climate system and are facing serious consequences because of that.

This is why, over my tenure in the Senate, I have authored and sponsored the passage of the Ecological Solid Waste Management Act, the Clean Air Act, Clean Water Act, the Renewable Energy Act, the Climate Change Act, and the People’s Survival Fund, among other key measures to improve our environment, build up our resilience against disaster, and fight climate change. I also made sure that the Philippines would take leadership in negotiating the Paris Agreement and made sure we ratify it so we could benefit from the opportunities it provides for adaptation and mitigation.

I speak of the need to protect the weak, the dispossessed, and the marginalized in our society. For them, I have supported the Magna Carta for Women, the Anti-Child Labor Law, the Anti-Violence Against Women and Children Act, the MSME Act, Barangay Kabuhayan Act, the Anti-Trafficking in Women Act and its expanded version, and the Expanded Senior Citizens Act.

And because nature and culture go together, because culture binds us as a people in the deepest and most enduring ways, I have supported important initiatives in the arts in their full range and variety, from our indigenous artisans to Philippine representation in the Venice Biennale. I co-authored the National Cultural Heritage Act, and I am also sponsoring a bill to establish a full-blown Department of Culture, as well as a bill strengthening the mandate of the National Museum.

Speaking of Tatak UP, I was told—perhaps “forewarned” is the better word—to expect a short demonstration at the end of these ceremonies, as part of what has become by now a commencement tradition. To the demonstrators, I say welcome, and say your piece if you must, as I have said mine. UP will not be UP without you.

But I also ask you to consider this, when the shouts have died down and when we walk out of this amphitheater to face the rest of our lives, you may discover, as I have, that there are higher forms of, and larger reasons for, protest and affirmation.

Someone has to speak up for the earth itself, for nature itself, for the voiceless among us. My work in the Senate is my demonstration against the abuses and inequities that have destroyed our world. But beyond speaking, we need to act, in our respective spheres and communities, to protect the future. Samahan po sana ninyo ako sa adhikaing ito, at magkaisa tayo sa pagsasabuhay at pagtaguyod ng ating paglayang minamahal.