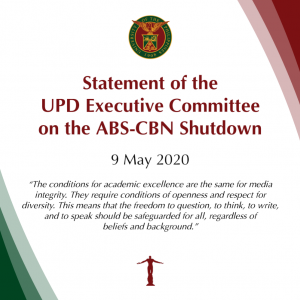 The shutdown of ABS-CBN, especially in the time of the COVID-19 pandemic, is a disservice to the Filipino people.

We consider all broadcast media organizations, including ABS-CBN, as partners in engaging the public. They provide channels and platforms for bringing vital information to communities and other places which schools and universities are not able to reach. They offer platforms for the university’s scholars, researchers, scientists, and artists to speak to broader audiences, translating expert knowledge into popular forms and transmitting ideas and discourse into the wider public arenas.

For the truth to stand above mendacity, a university provides an arena for contending views to debate. The conditions for academic excellence are the same for media integrity. They require conditions of openness and respect for diversity. This means that the freedom to question, to think, to write, and to speak should be safeguarded for all, regardless of beliefs and background. While ABS-CBN has been criticized for its political biases, it has also given space for diverse political views, a process that is fundamental to democracy.

The shutdown of the network on May 5, two days after the commemoration of World Press Freedom Day, was a stunning blow against the freedom of the press and people’s right to information.

We cannot stress how important and critical a role mass media plays during this time of crisis. As COVID-19 spreads and worsens at the national and global scale, it is wrong to silence a vital channel of information such as ABS-CBN, which has become, after years of public service, a significant pillar of the media establishment.

Moreover, the shutdown has resulted in the loss of jobs for 11 thousand employees, aggravating further the precarious situation of growing economic instability and hunger resulting from containment measures of the pandemic.