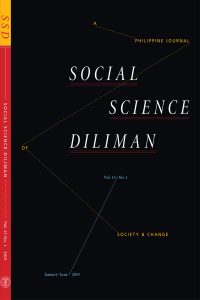 (JUL. 12) — The Vol. 15 No. 1 issue of “Social Science Diliman” (SSD) now online deals with “the construction of identity in the context of Southeast Asian nations and its relations with the West,” according to its editor’s notes.

Prof. Grace Barretto-Tesoro, PhD, the editor of the latest SSD, said in her notes that through “a review of recent literature centered on colonial history and practices in this region, new perspectives in identity and nation building in this sphere can supersede age-old stereotypes, notions and even misconceptions regarding colonial literature.”

The latest issue contains the article “John Rawls and distributive justice in a globalizing world” by Renante D. Pilapil and three book reviews.

According to Barretto-Tesoro, Pilapil’s article examines the theory of global justice and emphasizes that global inequality “should be solved to reduce global poverty and avoid ‘humiliation among the world’s poor,’ for inequality is directly tied to the ‘loss of self-respect and self-esteem.’”

Included in this SSD issue are the books reviews of Kathleen Felise Constance D. Tantuico on “The Filipino primitive: Accumulation and resistance in the American museum” by Sarita Echavez-See; Wan Faizah Wan Yusoff on “Nurturing Indonesia: Medicine and decolonization in the Dutch East Indies” by Hans Pols; and Clement C. Composano on “Women who stay: Seafaring and subjectification in an Ilocos town” by Roderick G. Galam.

Tantuico’s review discusses what it means to be Filipino and creating a new narrative of who and what is a Filipino, Yusoff’s review highlights how health and medicine were used by the Indies to resist colonial rule, while Camposano’s review discusses how the identities of the wives of Filipino seafarers in an Ilocos town are built through their social relations and interactions with the outside world through their husbands.

Barretto-Tesoro reminds that in this day and age people should “aspire to assert our identities so that they are free from past colonial rule and current global organizations that replicate colonial policies.”