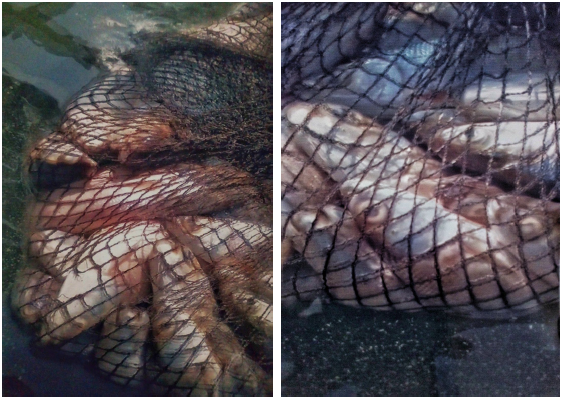 (JUN. 13)—LAGUNA, Philippines – Thousands of dead tilapia and bangus were scattered in the fishing zone of Laguna de Bay as a massive fish kill incident occurred in Biñan and Pila Laguna.

Vernan Magundayao, a resident and a fisherman at Biñan said an estimated 500,000 fish have died inside the fish cages while most of the remaining ones are producing foul odor considering it as non-marketable. He added that the said fish kill started on May 4 and lasted until the end of May.

Ireneo G. Bongco, Senior Science Research Specialist at Laguna Lake Development Authority (LLDA) said the fish kill was caused by green tide (red tide in saltwater) or algal blooms, where the fish suffered from asphyxia due to deficiency in dissolved oxygen (DO) level concentration brought by the competing thick layer of green tide in the lake surface.

(Top right) A fisherman removing the dead fish at Biñan, Laguna. (Top left) Some of the remaining tilapia from the fish kill incident

Researchers from the UP Institute of Environmental Science and Meteorology (UP-IESM) Environmental Pollution Studies Laboratory (EPSL), together with LLDA, conducted the water quality monitoring on May 29 as part of their deliverable to the Program SCALE, (Synergistic Capacity Advancement in the Management of Laguna LakE). Based on initial findings from the water quality test report of EPSL, DO from the area of Biñan is lower than the standard limit of the Department of Environment and Natural Resources Administrative Order 2016-08 (DAO 2016-08) and ammonium and phosphate nutrients are found higher than the prescribed limits. (Refer to Table 1)

Table 1. Result of the water quality test conducted on May 29 at the area of Biñan, Laguna.

Program SCALE aims to address the impacts of watershed disruption, ecological land degradation and aquaculture pollution by identifying the emerging water contaminants, tracking the sources of microbiological pollutants and quantifying the extent of contamination in commodity fish in Laguna de Bay. Funded by the Department of Science and Technology, and in collaboration with the LLDA, the program is implemented by UP Diliman College of Science Institute of Environmental Science and Meteorology, Institute of Chemistry, and Natural Sciences Research Institute.—Liza Jane Angeles