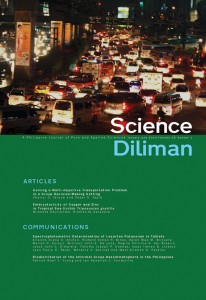 One of the official journals of the Office of the Vice Chancellor for Research and Development, “Science Diliman” is a Category A-2 journal declared by the Commission on Higher Education (CHED).  As earlier reported in UPdate online, Category A-2 is the highest level of accreditation CHED confers to journals not (yet) listed in Scopus or Thomson Reuters.  Category A journals receive a publication award of PhP 200,000 per year from CHED during the period of accreditation.

The first article, “Solving a Multi-objective Transportation Problem in a Group Descision-Making Setting” was written by Cherryl O. Talaue and Cesar G. Tapia.

The second communication “Biodistribution of the Informal Group Basommatophora in the Philippines” was based on the research findings of Patrick Noel Y. Young and Ian Kendrich C. Fontanilla.

Dr. Marco Nemesio E. Montaño of UP MSI is the editor-in-chief of “Science Diliman.”