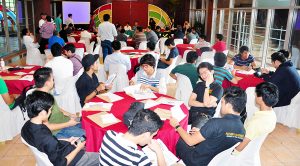 The 2014 Frat Summit held at the Ang Bahay ng Alumni.

Whereas last November 14, 2018 a violent altercation occurred between the Alpha Phi Beta and the Upsilon Sigma Phi fraternities in the UP Diliman campus;

Whereas released videos of the altercation showed that both sides used homophobic slurs against each other in the build up towards physical violence;

Whereas these homophobic slurs were uttered within the hearing of members of the LGBT organization, UP Babaylan;

Whereas another incident of frat-related violence involving a gun occurred on November 15, 2018;

Whereas the ideas and sentiments expressed in those statements were misogynistic, sexually violent, racist and prejudicial to many sectors of the UP Community including Muslims, the LGBT, indigenous groups particularly the Lumads;

Whereas the conversations named, slandered and/or threatened certain individuals including a heartless reference to a victim who has lost his life to hazing;

Whereas a sense of impunity pervades the chat group particularly naming UP officials such as President Danilo L. Concepcion and Executive Vice President Teodoro J. Herbosa who are members of the Upsilon Sigma Phi as protectors;

Whereas the leaked conversations also interpret Chancellor Michael L. Tan’s statement condemning the violence as actually a sign that they are not going to be fully punished;

Whereas a sense of fear has been expressed by a number of UP students who have spoken up against frat-related violence, misogyny, homophobia, the Upsilon and/or other fraternities in general;

Whereas social media has also featured death and rape threats against those who have spoken out and that such language has been foul, violent and criminal;

Whereas all the aforementioned incidents remain under investigation;

Whereas many sectors of the UP Community, including President Danilo L. Concepcion and Chancellor Michael L. Tan, have condemned these latest incidents of frat-related violence as well as the continuing culture of toxic masculinity, misogyny and bigotry through statements and rallies;

Whereas this council believes that such a culture is the source of rape, sexual violence and hate crimes;

Whereas this council firmly believes that a culture of patronage and exclusion, which is implied by the sense of impunity we have witnessed in the current and past incidents of frat-related violence, is antithetical to the values of UP which believes in meritocracy, inclusivity and respect for differences;

Whereas the promotion of the safety and well-being of all sectors of UP but in particular the students is one of the highest duties of all faculty members;

Whereas an atmosphere of hatred, bigotry and intimidation is antithetical to the free and impassioned exchange of ideas which is a central element to the life of a community of scholars;

Be it resolved as it is hereby resolved that this Council:

1) Condemns in the strongest possible terms all forms of frat-related violence; misogyny, bigotry, and hate speech;

2) Decries with full force the continuing inculcation of a culture of toxic masculinity, exclusion and patronage by certain organizations of UP;

3) Calls on the UP Diliman Chancellor to ensure a comprehensive and thoroughgoing investigation of the aforementioned incidents without favor to any fraternity or individual;

4) Further calls on the Chancellor to make the report of this investigation and the sanctions meted out known to this council with appropriate measures such as the redaction of individual identifying data in order to protect the rights of those found guilty and the innocent;

5) Calls on UP administrators to institute programs and policies that will educate all sectors of the values of equality and non-discrimination, the non-aggressive resolution of differences, and a more enlightened view of sexuality;

6) Calls on UP administrators to institute policies and programs to stop hazing and all other forms of cruelty in the initiation rites of all UP organizations;

7) This council resolves further that we will not let this incident be forgotten or buried. We request the Chancellor to place it as an agenda item for every subsequent University Council meeting until the situation is resolved.

This council calls on all faculty, staff, students and alumni of UP to denounce frat-related violence. It calls on all to respect the investigation process and, especially for those who are members of frats, to allow for a process of investigation and justice that is free from interference and partiality.

It calls on all sectors to continue to be vigilant and keep our campus a safe and nurturing campus.