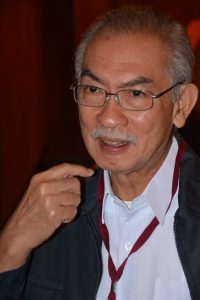 (MAY 30) — UP Diliman Professor Emeritus of Sociology Randolf S. David won the grand prize of this year’s Fukuoka Prize.

Established in 1990 at Fukuoka City in Japan and formerly known as Fukuoka Asian Culture Prize, the Fukuoka Prize understands the distinctive cultures of Asia and promotes a harmonious and peaceful co-existence of these diverse cultures. The award recognizes those who have made outstanding contributions to the academia, arts and culture in Asia.

According to the online article of Paterno Esmaquel II of Rappler, David was cited for the dynamic part he played “in achieving social justice in the Philippines by sharing his knowledge as a sociologist widely through university education, TV programs, and newspaper columns, and has made great efforts to promote academic and cultural exchange among Asian countries and to deepen their mutual understanding.”

David’s citation also read, “His determined actions to improve currently existing society for the better by opening universities to the public and by working together with citizens or through overseas networks, has earned him high praise as a leading Asian public intellectual and intellectual activist,” the Rappler article indicated.

David is also a well-known journalist, public affairs host and author of several books including two books that won the National Book Award in 2002 (“Reflections on Sociology and Philippine Society”) and 2003 (“Nation, Self, and Citizenship: An Invitation to Philippine Sociology”).— Mariamme D. Jadloc, image by Leonardo A. Reyes