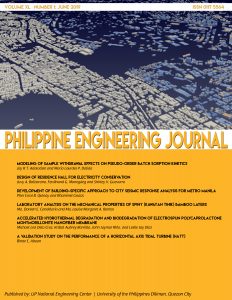 (SEPT. 6)—The first issue of the Philippine Engineering Journal for 2019 was released on Aug. 31, with articles on topics ranging from sorption kinetics models to testing bamboo as a building material.

Published by the UP Engineering Research Development Foundation for the UP National Engineering Center, the Philippine Engineering Journal is a biannual double-blind peer-reviewed refereed journal that serves as a national medium of exchange of technical information and dissemination of engineering knowledge through the publication of technical papers, technical notes and research briefs.

“Modeling of Sample Withdrawal Effects on Pseudo-Order Batch Sorption Kinetics” looked at the large variation in values when computing the sorption kinetics of samples taken from single-run batch studies.

“This systematic error is investigated for sorption reaction models, generalized to any reaction order. The problem is formulated to quantify the bias associated with the number and volume of samples withdrawn under relatively slow equilibrium. The results are extended to rapidly equilibrating systems following the Langmuir isotherm model,” Adolacion and Dalida of the Department of Chemical Engineering said.

The researchers defined sorption as “the process involving the assimilation of one substance into another.” In wastewater treatment, the desired chemicals are removed from the solution by having them attach to a solid called a sorbent, which is either disposed of or treated afterwards.

The top three processes that consume the most electricity are ventilation such as air-conditioning units or electric fans (37%) followed by lighting (25%) and computing (24%). Based on results, the group proposed two sample room layouts for either an air-conditioned or fan-ventilated room.

Balbarona and Manegdeg of the Department of Mechanical Engineering (DME) and Guevarra of the College of Home Economics made several recommendations such as replacing the emergency exit doors with steel security gates to allow natural light in, and changing the color of the floor tiles from dark to light-colored ones.

Data generated by this approach can also be used as inputs in other disaster mitigation studies like the simulation of evacuation plans. It has the added perk of being easy to explain to non-technical stakeholders.

Candelaria and Ramos of ICE said their dried bamboo samples “recorded high layered tensile strengths, as high as 600 MPa (megapascals).” These properties are similar to that of some high-strength steels.

“Accelerated Hydrothermal Degradation and Biodegradation of Electrospun Polycaprolactone Montmorillonite Nanofiber Membrane,” looked into polycaprolactone nanofiber membrane (PCL), one of the materials used in the proper disposal of heavy metals from mine wastewater.

Cruz, Bornillo, Riña and Diaz of the COE Department of Mining, Metallurgical and Materials Engineering said their results “would be useful in establishing protocols for the disposal of PCL and its derivatives after being used in various applications not just in wastewater treatment but also in other applications like biomedical devices in the medical industry.”

Producing power from tides is the subject of the study “A Validation Study on the Performance of a Horizontal Axis Tidal Turbine (HATT).”

Author Abuan of DME created and tested a version of the Sheffield HATT, a tidal turbine designed to work better in unsteady flow.

For the list of the members of the editorial and international advisory board, click here.—Anna Regidor, journal cover by the National Engineering Center