Parking and traffic changes around PHS 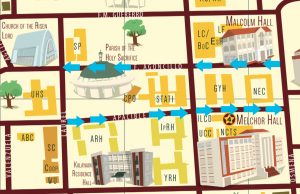 Arrows indicate the one-way traffic flow across both streets.

(MAR. 21)—Starting Apr. 1 there will be changes in the parking scheme in two areas of the University: J.P. Laurel Street near the PhilPost office and Agoncillo and Apacible streets along the Parish of the Holy Sacrifice (PHS).

Memorandum number JECL-19-19 issued by the Office of the Vice Chancellor for Community Affairs (OVCCA) now designates J.P. Laurel Street as a No Parking Zone except for lessees of the housing units on the area. Business owners and customers of the concessionaires in the area should find alternative parking areas.

The OVCCA said the new policy arose partly from concerns of the housing unit lessees who found that their driveways and garages often blocked by customer or business owner vehicles.

The memo further states that “a one-sided parking policy shall be enforced for both Agoncillo and Apacible Streets and two-sided parking will only be allowed at the vicinity of the PHS.”

A one-way traffic scheme will also be enforced on both streets: at Agoncillo St. from the Academic Oval going up to J.P. Laurel Street; and at Apacible Street from J.P. Laurel Ave. going down to the Academic Oval.—Anna Regidor, image by UP Diliman Information Office and Jefferson Villacruz