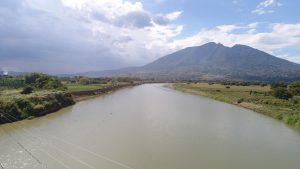 A photo of the Pampanga River basin. Photo from the DENR River Basin Control Office website

(FEB. 15)—Contaminants of emerging concern have been found in the Pampanga River basin according to researches made by UP Diliman graduate students.

According to the 2011 book “Risks of Hazardous Wastes” by Paul E. Rosenfeld and Lydia G.H. Feng, emerging contaminants “are synthetic or naturally occurring chemicals or any microorganisms that are not commonly monitored in the environment but have the potential to enter the environment and cause known or suspected adverse ecological and/or human health effects.”

This was revealed during a seminar workshop on the occurrence, sources and impacts of antimicrobials and endocrine disrupting compounds that was held on Feb. 8 at the Institute of Environmental Science and Meteorology (IESM).

Kenneth Arguelles, Aileen Castañeda, Teresa Mina and Renato Agustin each conducted a review of recent literature on emerging contaminants in the Pampanga River basin and identified the presence of bisphenol A, nonylphenol, antimicrobials, estrogens and pesticides, in varying concentrations.

The workshop and researchers are part of a project named “Developing Information Infrastructure for Managing Antibiotics and Endocrine Disrupting Substances in Pampanga River Basin and its Coastal Environs: Maps, Transport Models and Bioindicators of Ecological and Public Health Risks” under the Commission on Higher Education-Philippine California Advanced Research Institute.

The project aims to create an information framework that will map of the distribution and concentration of contaminants of emerging concern along the Pampanga River Basin.—Anna Regidor