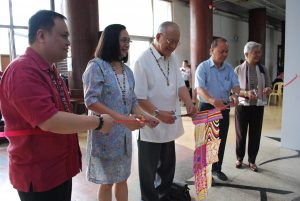 (FEB. 18)—In commemoration of the 35th anniversary of the split of the College of Arts and Sciences (CAS) and the tri-college PhD program in Philippine Studies, a revisiting of history and exhibit launch entitled Pagsasangang-Dunong was held at the Palma Hall (PH) Lobby, Feb. 12.

CAL, CSSP and CS are collectively called the “tri-college,” whose roots are traced to the then College of Philosophy, Science, and Letters. Established in 1910, the now defunct unit was one of UP’s pioneer colleges. It was renamed as the College of Liberal Arts in 1911 and CAS in 1960. The three big colleges were once housed together at the PH, the reason some people still call it “AS” nowadays. 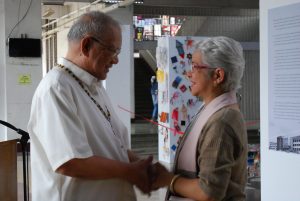 Past and present: Bauzon and Dr. Maria Bernadette L. Abrera, the first and the current deans of CSSP, with the former being given a necklace of honor.

Speaking about his experience as the first CSSP dean, Prof. Leslie E. Bauzon, PhD, of the Department of History described the event as “a homecoming.” He also recounted the early years of CSSP, particularly student activism in the 1980s and the problems that beset the newly-formed college.

As an advice to the current administrators, Bauzon urged to “involve the nay-sayers” and to do “the best according to [one’s] judgment towards attaining the aims and goals of CSSP.”

Bauzon was alongside Prof. Pablo K. Botor and Prof. Roger Posadas, PhD, as the first deans of CAL and CS respectively.

Presently, “tri-college” also refers to CAL, CSSP, and Asian Center (AC) which manage the PhD in Philippine Studies program of UPD. The said degree was formerly under CAS. 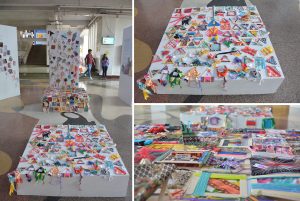 Dean Joefe B. Santarita of AC, in his closing message, described the event as a reminiscence of the contribution of predecessors. He emphasized that the hard work of past stakeholders will serve as “gabay para sa susunod na dantaon.”

Also launched during the gathering was an exhibit entitled Daloy, Daluyong, Daluyan (Flow, Shift, Medium), a work of visual artist Alma Quinto. It consisted of handicrafts made of colorful cloths, strings, sticks and scratch papers, each one with a story to tell. The event centerpiece was an outcome of several workshops held by Quinto with UP students, faculty, and staff from Feb. 6 to 11.

Quinto remarked that her collaborative work with UP stakeholders depicted “the flows and shifts, and the interfaces that characterize the birth and rebirth of the CAS.”