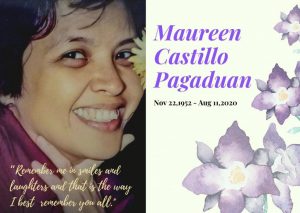 (AUG. 14)— Maureen Castillo Pagaduan, a former professor at the UP College of Social Work and Community Development (CSWCD), passed away on Aug. 11 after a two-year struggle with pancreatic cancer.

A professor and later, chairperson at the Department of Community Development (DCD), she handled both undergraduate and graduate courses. She was also coordinator of CSWCD’s Office of the Continuing Education, now Research and Extension for Development Office where she also served as director.

She was a co-founder of the UP Center for Integrative and Development Studies (CIDS) Program on Alternative Development (AltDev) in 2017. Pagaduan’s involvement with AltDev “greatly expanded and cemented the Program’s engagement and cooperation with local communities of grassroots women’s organizations and indigenous peoples,” according to CIDS website.

As a DCD professor, she taught courses on community building, community organizing, mobilization and innovative strategies, advocacy work and social movement building. Her research interests were “democracy, citizenship and multiculturalism, migration and marriage migration, ICT and women’s agency, women and peace building and social movements and their relevance to the profession of community development,” according to the CSWCD website.

Pagaduan obtained a BS Hotel and Restaurant Administration degree in 1974 and Master of Community Development in 1981, both from UP. She completed her Master of Development Studies at the Institute of Social Studies, The Hague, Netherlands. She joined the CSWCD faculty in 1980 and retired in November 2017 with a Professor 11 rank.

She served the CSWCD for 37 years.

UPD mourns her passing and extends condolences to the family.