(Oct. 14) — “One hundred thirty years after its first publication, it is still very much alive today,” said Prof. Anna Marie Sibayan-Sarmiento, PhD from the UP Department of European Languages (DEL) as she gave the opening remarks to Dr. Axel Gasquet’s, talk on the latter’s French translation of Jose Rizal’s Noli Me Tangere on Oct. 9 at Rm. 1131, Pavilion 1, Palma Hall. 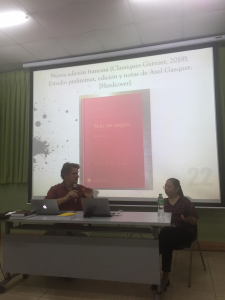 Gasquet, a professor from Université Clermont Auvergne, delivered a lecture on his new critical edition of the French translation of Noli Me Tangere as part of the Bahaginan: College of Arts and Letters Research Forum. Despite his book being published in French, his talk was in Spanish with an interpretation in English by Prof. Daisy Lopez, PhD, also from DEL.

Gasquet explained that his version, Noli Me Tangere: Roman Tagal (2019), is the third edition of Noli Me Tangere in French, so he included in his presentation other example translations in French and Spanish involved in the production of the book.

Gasquet compared his translation with that of Au Pays des Moines (1899), the first edition by Henri Lucas and Ramon Sempau, and N’y touchez pas! (1980), the second edition by Jovita Ventura Castro.

The first change is that he retained the original Latin title of the novel.

“For me, it’s very important to re-establish, put back the original title and subtitle that’s also in the original,” said Gasquet in Spanish.

The second change is, for the first time, his edition incorporated Chapter 25: Elias and Salome, which Rizal also originally omitted in his book’s first publication.

This chapter which seems trivial, according to Gasquet, finds its importance in Elias refusing to get married to Salome. He added that the renunciation is not because of the absence of love for Salome, but because Elias wanted to get married to the revolution. 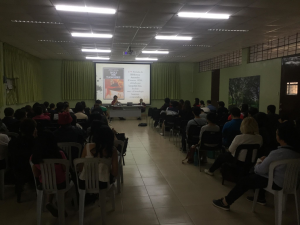 A small hidden story. Gasquet also shared the story behind the first edition of Noli Me Tangere in French and how it became the first international translation of the book even before the Spanish, English, or Filipino versions.

He said that the reason why H. Lucas and R. Sempau translated the book was rather strange. Since the two were associated with the socialist-anarchist movement in Europe at that time, it interested them to share the revolutionary contents of Rizal’s novel. The “Au Pays des Moines” is now kept at the Bibliotheque Sociologique No. 25 by Pierre-Victor Stock in France.

Third edition. Gasquet’s edition is edited by Classiques Garnier. This new critical apparatus included new references and footnotes, a comprehensive Tagalog-French glossary, an index of names, Jose Rizal’s bibliography and a selective critical bibliography. The original terms and names of characters were also restored in this version.