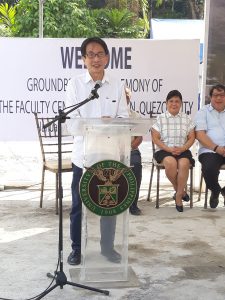 At the groundbreaking ceremony held Jan. 25 at the FC grounds, UPD Chancellor Michael L. Tan announced that the Department of Public Works and Highways (DPWH) will implement the new FC building’s construction with Nov. 24, 2020 as their target completion date.

Tan said “It’s not that far off and maybe it’s appropriate as well that it will be finished in 2020 because 2020 evokes the metaphor of perfect vision. The Faculty Center has always guided us in UP, not just Diliman but the whole of UP, for our visioning process.”

“Sa Chinese mythology, may phoenix. Ang phoenix ay galing sa abo. The phoenix rises from the ashes and the new FC would be a phoenix. It would be grander. It would be more splendid than the old FC but still carry its spirit forward,” he added. 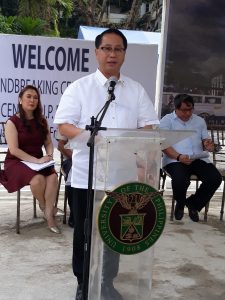 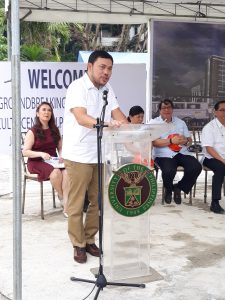 DPWH Secretary Mark A. Villar said “On behalf of the DPWH, I’d like to reassure the students, the whole of the UP community, that the DPWH will ensure that the implementation of this project will be fast and efficient just like the people, the students and the faculty of UPD.”

A TVUP audio-visual presentation on the testimonies from the faculty about the old FC was shown during the program.

Furthermore, Concepcion and Villar signed the new FC building’s blueprints and were placed inside a time capsule containing memorabilia and a copy of the building design. Afterwards, the time capsule was buried in the construction site.

The groundbreaking ceremony was attended by the UP System officials, various academic units’ deans, faculty, staff and students, and the College of Arts and Letters Student Council.