(MAR. 2)—In a simple ceremony at the Quezon Hall steps that coincided with UP Diliman’s (UPD) flag raising, the campus witnessed the changing of its guards as Prof. Fidel R. Nemenzo, DSc took his oath of office as the UPD’s 11th Chancellor on Mar. 2.

He was sworn to office by UP President Danilo L. Concepcion and handed over the UPD Chancellor Medallion by Professor Emeritus Michael L. Tan, DVM, PhD and UPD 10th Chancellor. In his brief speech, Nemenzo thanked his predecessor for having served UPD for six years with his “gentle and visionary leadership,” the UP President and the UPD community.

Nemenzo was UPD Vice Chancellor for Research and Development from 2014 to Feb. 29, 2020. A professor of Mathematics at the College of Science, he was appointed as 11th UPD Chancellor by the Board of Regents at its 1350th meeting on Feb. 3. 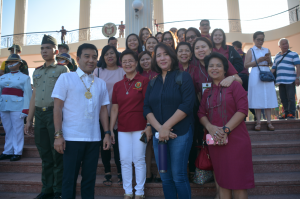 He has a Master of Science (1992) and Doctor of Science (1993) from the Sofia University in Tokyo, Japan and his areas of expertise are number theory, elliptic curves and coding theory. He earned his BS Mathematics from UPD in 1985.

He joined the UPD Institute of Mathematics faculty in 1992. Among his numerous accolades and awards, notable are his Achievement Award in Mathematics from the National Research Council of the Philippines (NRCP) in 2013 and the Gawad Chanselor Pinakamahusay na Guro in 2005.

Nemenzo is a member of the NRCP Governing Board and chair of the NRCP Division II (Mathematical Sciences).—UPD Information Office