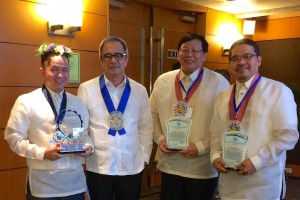 (MAR. 18)— The National Institute of Physics (NIP) and two of its faculty members were honored by the National Research Council of the Philippines (NRCP) during the NRCP’s 82ndGeneral Membership Assembly on March 11 at the Philippine International Convention Center. NIP received the 2014 NRCP Outstanding Institution Award, while Dr. Percival Almoro and Dr. Wilson Garcia received the 2014 NRCP Achievement Award in Physics and the NRCP Service Award, respectively.

NIP was honored “for its contributions to the country as the leading center for physics research and education through its sound academic and research policies geared for excellence, sustained and increasing generation of new knowledge with its high-impact research as evident in its publications and citations in international peer-reviewed journals, resolute belief that the country can build a scientific nation manifested by its high graduation rates of MS and PhD Physics students, unwavering leadership in academic and scientific societies and tireless engagement in numerous extension work and public service to strengthen science in the nation; and as an inspiration that a Philippine institution can be at par with the world. “

Meanwhile, Almoro was honored for his scientific contributions in holography and optical metrology, and Garcia was honored for his inspiring leadership and service as Chair of the Physics Division and as member of the NRCP Governing Board from 2011 to 2015. — Photo courtesy of Dr. Almoro