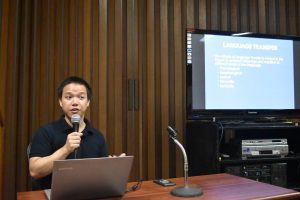 (AUG. 17)—The national language evolves and develops based on existing languages in the Philippines.  This was part of the conclusion of Francisco Rosario Jr.’s research which he presented at the annual Linguistics Faculty Research Colloquium, Aug. 17, 1 to 4 p.m. at the Palma Hall 207.

Rosario, who presented “The role of language transfer in language variation and change: The case of Pangasinan & Filipino” said innovations in the language result in linguistic variation. 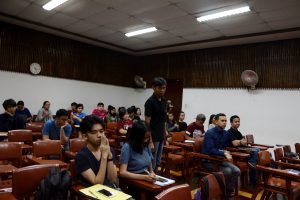 Rosario’s work is one of four researches presented at the colloquium.  The others are “The dual ‘when’ in selected Philippine languages: Its nature, distribution & potential implications” by Aldrin P. Lee, PhD, “Porohanon phonology: An acoustic description” by Vincent Christopher Santiago and “Bolinao pronominal system & Philippine voice: A preliminary investigation” by John Venson Villareal.

The four researchers are members of the UP Department of Linguistics faculty and their research works were previously presented at SEALS 28, the 2018 Southeast Asian Linguistics Society Conference held from May 17 to 19 at Kaohsiung, Taiwan.

The Faculty Research Colloquium is part of the month-long celebration of Linguistics Month 2018, as part of the Department’s 96th founding anniversary.

Linguistics and Leonardo A. Reyes