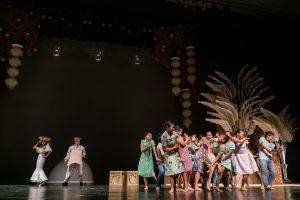 A run-through of tomorrow’s event

(JUNE 17) — The University of the Philippines Diliman (UPD) will honor five National Artists at this year’s “Seremonya ng Pagbubukas” on June 18, 3:30pm at the University Theater through songs, dances and skits.

The opening ceremony will have five segments, each segment honoring a national artist.  The event is the start of the annual week-long “Linggo ng Parangal” that honors outstanding faculty, staff, REPS, students and public service programs.

The “Seremonya ng Pagbubukas” is free and open to the public.  It also coincides with UP’s 111th Foundation Day.

To encourage community participation, UPD Chancellor Michael L. Tan announced that “work and classes on June 18 will be suspended from 3 to 5pm.”

Mojares earned his PhD Literature in 1979, Alcala his BFA Painting in 1950, Kidlat Tahimik his BA Speech and Drama in 1963, Lapeña-Bonifacio her BA English in 1953, and Cayabyab his Bachelor of Music, major in Theory in 1983.

The National Artist Award, created through Proclamation No. 1001 issued on Apr. 27,1972, is the highest recognition given to Filipinos who “made distinct contributions to arts and letters.” It recognizes excellence in the fields of music, dance, theater, visual arts, literature, film, broadcast arts, and architecture or allied arts.

Renowned painter and UP’s own Fernando Amorsolo was the first recipient of National Artist for Literature Award in 1972.  To date, there are 78 national artists. — Benito V. Sanvictores Jr. and photos by Pol Torrente