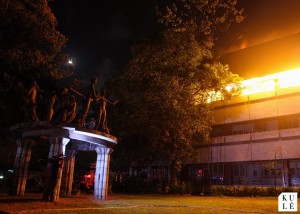 (APR. 4)—Fire out was declared at the Faculty Center (FC) at 11:20 a.m. on Apr. 1 (Friday) about 10 hours after it started. However, several small fires were re-ignited until Sunday, the last one reported at 6:40 p.m. on Sunday during the “pagbangon” ceremony of the College of Arts and Letters (CAL) and the College of Social Sciences and Philosophy (CSSP).  These were very small fires and were quickly extinguished.

Let’s hope there won’t be any new fires.

The building remains off limits for safety reasons, and because the Bureau of Fire Safety has an order: “to refrain from tampering/destroying or clearing the area/s gutted by fire without proper clearance from the Chief of Intelligence and Investigation Section Quezon City Fire District.”

CAL dean Dr. Amihan Bonifacio-Ramolete and CSSP dean Dr. Grace Aguiling-Dalisay convened meetings with the respective College Executive Boards a few hours after the fire to work out relocation plans for some 250 faculty members and 50 staff.

CAL faculty members are relocated to Pavilion 1, which was intended mainly as CAL classrooms. Permanent electrical connections were being made as of Saturday morning (Apr. 2). These are temporary measures and we have to face the daunting challenge of a more permanent home for the CAL faculty and staff members.

CSSP is more fortunate because the renovations on Pavilion 2 and 4 were intended as faculty rooms. CSSP faculty from the Department of History and the Department of Philosophy will relocate to Pavilion 2 as soon as it is completed. The building is practically complete but has no electricity and internet connection.

Departments of Anthropology and Linguistics are assigned to Pavilion 4 but renovation has not started because of delays in its original occupant, Institute of Biology, moving to a new building.

Inquiries on the cause of the fire cannot be answered just yet, but let us guard against fuelling rumors and finger-pointing. I have heard some people complaining about our not having a fire station within UP. I want to point out we did have one many years ago but, in surreal Diliman style, it burned down.

Last year, Vice Chancellor for Community Affairs Nestor T. Castro and I began to negotiate with the Bureau of Fire Protection to have a new one built. We will push our legal office to finalize the contract.

There is one  fire truck owned by Barangay UP Diliman, a tiny improvised one, but it has been deployed every time we have a reignited fire, a stark symbol of the relationship we have with that barangay: little David ready to help the Goliath that so often belittles them.

We will pick up lessons from this tragedy, starting with having to be very strict from now on with a night curfew, which was set at 10 p.m. at FC, after which guards were supposed to shut down electricity.  Deans and directors have also been instructed to have duplicate keys of all rooms secured in a central place, to be used in case of any emergency.

I am overwhelmed by the messages of solidarity and offers of help from faculty, students and alumni.  To all who sent those messages, especially other deans and directors, maraming, maraming salamat.

I did want to say though that offers to raise funds, which have come mainly from alumni, should be acknowledged but held in abeyance until we can establish the needs around the FC building.

The grieving of CAL and CSSP faculty and staff who were so adversely affected continues. I had a room too at FC which did not have too many of my belongings but I feel the loss – the room having been a place for study and reflection, mentoring, many friendships and happy times.

With others, it was a second home, a private library, an archive, a museum, or an art gallery. FC rooms are not just ordinary offices. These are repositories of knowledge. Even in this age of e-books, nothing can replace the “real” books we brought home from our conferences, the first editions, the authors’ autographs, the gifts from loved ones and colleagues with their dedications.

We did not just lose a building.  Nothing can replace the collections of artworks (such as paintings); recordings, field-notes and mementos from fieldworks; original manuscripts of komedya, sarsuwela, sinakulo, and musical sheets; artifacts such as masks and puppets from around the world; diaries and other creative writing materials. These are valuable resource materials our faculty members use in their research and teaching activities.

May I give special thanks to the University Student Council, whose members were with us during the fire offering food, water and moral support. In the days that followed they were there too, together with other students in solidarity with faculty and staff.

One of my former students offered a fund-raising event, which I found touching, but more important was his advice: be strong.

We will be strong, and we will overcome.