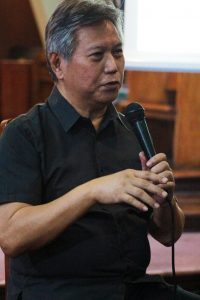 Malicsi was a member of the faculty of the Department of Linguistics of the College of Social Sciences and Philosophy and continuously served the University for 53 years.

According to Prof. Jem R. Javier, Department Chair of Linguistics, Malicsi was the first director of the President’s Commission on Culture and the Arts (PCCA), the precursor of the Office for Initiatives in Culture and the Arts. He served as its head for 17 years. The PCCA was the last occupant of the UP Carillon before the tower was restored to what it is now.

“Through him, zarsuela was restaged and revived in the Ilocos region and became known (once again) nationwide,” Javier said.

Malicsi earned his PhD in Philippine Studies (Linguistics, Anthropology, Sociology) from UP Diliman and took a Doctoral Enrichment Program in Linguistics from the State University of New York in Buffalo.

Among his noteworthy published works was his “The English Linguistics Project (ELP) English Manual,” (8th edition), a comprehensive response to the integration of the ELP’s English language courses for students.

The book introduced new concepts that reflect contemporary grammatical theory, with entries on diction, idioms and pronunciation based on current data on Filipino English. The ELP was Malicsi’s research and extension service for the Department of Linguistics.

Malicsi was to hold the lecture “Halitaq Baytan” on the dialect of the Sambal Aeta language spoken in the province of Zambales this Tuesday, Dec. 3. — Mariamme D. Jadloc, photo courtesy of UP System