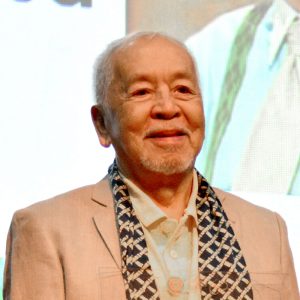 Popularly known as Tony Mabesa, he was dubbed as the “Lion of the Theater” by columnist Amadis Ma. Guerrero. He was a notable director, educator and actor having directed over 170 productions staged locally and internationally. He starred in over 130 films (foreign, indie, and mainstream productions) and 60 television shows (Villa Quintana, Vietnam Rose and sitcoms).

He was born on Jan. 27, 1935 in Los Banos, Laguna where his remarkable career in performing started. It is at the UP Rural High School where he had his directorial debut on a school production. In 1956, he earned his degree in Bachelor of Science in Agriculture at the UP Los Baños (UPLB) It was at UPLB where he was mentored by National Artist for Theater Wilfrido Ma. Guerrero. In 1965, he obtained a master’s degree in Theatre Arts at the University of California. He then finished his Graduate Studies in Dramatic Literature at the University of Minnesota in 1968. In 1969, he earned his second degree specializing in Special Education at the University of Delaware.

Mabesa became a faculty of the Department of Speech Communication and Theatre Arts (DSCTA) at the UP College of Arts and Letters in 1975. He spearheaded the development of the theatre arts curriculum at UP Diliman which includes the Bachelor of Arts in Theatre, Master of Arts and Certificate in Theatre Arts. He established the Dulaang UP in 1976 which is now on its 43rd season and the UP Playwrights Theatre in 1986 which is now on its 25th season. He also founded the Angeles University Foundation Repertory Theatre in 2005. He became a professor emeritus of theatre of the DSCTA in Jan. 1, 2002.

Along with his illustrious background, he’s also a recipient of various notable awards. This year he was awarded the “Parangal sa Sandaan” by the Society of Philippine Entertainment Editors (SPEEd) at the Eddys Awards for his contributions in the Filipino film industry, he was also nominated as “Best Supporting Actor” in the Eddys. Recently, he won “Best Actor” and a “Gold Remi Award” at the Houston International Film Festival for his role in Rainbow’s Sunset. In 2018, he won the “PinakaPASADOng Katuwang na Aktor” given by the Pampelikulang Samahan ng mga Dalubguro (PASADO), he also won the award for “Best Actor in a Supporting Role” at the Metro Manila Film Festival (MMFF) Gabi ng Parangal, both awards were for his role in the film Rainbow’s Sunset. In 2017, he won “Best Stage Director” at the 30th Annual Aliw Awards.

His remains will be at the Arlington Memorial Chapels, Araneta Avenue. —Ezekiel Dionisio, image by Jacelle Isha Bonus